[In ] one generally does not buy fruit, rather one is readily allowed to enter the orchards and eat all you wish. Only what are called “frutillas” [strawberries], and in frauli, are sold, even though they grow wild and in the country I have seen full leagues of strawberries, growing of their own accord, those who cultivate them make a lot of money. They are very different that those that I have seen here in Rome, both in color and in flavor, and in quantity because they grow as big as pears, and although they are usually red, they are, in Concepción, white and yellow.  (Padre Alonso de Ovalle, Historia Relación del Reyno de Chile, 1646)[1]

One of the many pleasures of living in Chile is that strawberries arrive in the farmers’ markets in mid October and remain until March, and they are, in the Chilean phrase, “the three Bs:” bueno, bonito y barato (good, pretty and cheap-presently $650-750 CLP/kg, $.60 US/lb)—even if they are not "as big as pears.” 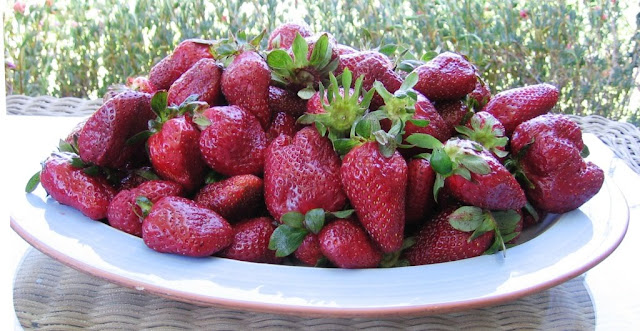 Strawberries (Fragaria chiloensis) have been a Chilean pleasure for a long time.  They grew wild in great abundance and were domesticated around 1300 AD by the ancestors of the Mapuche, south central ’s indigenous people.[2]  When the Spanish arrived they quickly became acquainted with Chilean strawberries and were impressed enough to take them back to .  In his Commentarios Reales de los Incas, Garcilazo de la Vega, son of a Spanish conquistador and an Inca princess, described the fruits of .

…he included in his descriptions a fruit called the Chili, which he thought probably had come to in 1557, six years after 's conquest [of Chile]. According to him, this pleasant-tasting fruit bore small seeds on its surface.... the Chili was rather long and heart-shaped instead of round, and the plant grew on low bushes which crept along the ground. Botanists are certain that de la Vega was describing the strawberry. As he was unable to give the fruit a Peruvian name, he called it instead the "Chili," thus supporting the evidence that the species was F. chiloensis, the strawberry of the Mapuche and Huilliche Indians.[3]

Fortunately, for those already confused about Chile and chili, the name chili didn’t stick, and for some reason neither the traditional Spanish word “fresa” (strawberry) nor the Mapuche kelleñ were used:  frutilla, literally “little fruit,” became, and remains, Chilean for “strawberry.”
Mapuche strawberries
Fragaria chiloensis [4] 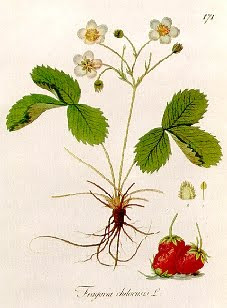 We know little about how the Mapuche grew and used strawberries, but a young Spanish soldier, Francisco Núñez de Pineda y Bascuñán, who was a Mapuche captive for 6 months in 1622 (see Feasting with the Enemy), and wrote an account of his captivity many years later, mentions them frequently.

…they brought me a plate of good size of fresh cultivated strawberries, and without exaggeration some were so large they could not be finished in two bites.  They devote even more care to their strawberry beds than we give to vineyards because they dry great quantities of them for their chicha.[5]

Chicha, wine or cider fermented from grains or fruits, was an important in all Mapuche social occasions.   And while maize chicha was the most important, fruit chichas, and especially strawberry chicha, were greatly appreciated by the young Francisco.

Even though we had eaten a very good supper, they brought me a pitcher of chicha of dried strawberries, clear, tasty and spicy, the best that they have. ….We ate happily and with pleasure because they toasted us with strawberry chicha, which for me was the best present they could give.[6]

Strawberry chicha was produced through spontaneous fermentation of fruit, mashed with water, although when available the lees of a previous batch were added to speed up the process.  The time necessary for production varied with the temperature and the sugar content of the fruit and it probably yielded 3 to 7% alcohol.[7]
The Mapuches’ domesticated strawberries were larger than the wild varieties, and tended to be pink or white, rather than red.  Louis Feuillee, a Catholic priest, provided a description of the Concepción strawberries he saw in 1709.

Several fruits, like pears, apples, strawberries, etc. were ripe. For dessert we were served some strawberries of a marvelous taste, whose size equaled that of our largest nuts. Their color is a pale white. They are prepared in the same manner as we fix them in , and, although they have neither the color nor the taste of ours, they do not lack excellence.[8]

In the 1830s French botanist Claudio Gay traveled throughout and later wrote extensively about Chilean natural history.  In his Agricultura he discussed the Chilean strawberry:

The frutilla or Chilean strawberry, called quelighen [kelleñ ] by the Araucanians, grows spontaneously in , especially in the south where they are very abundant.   They are also cultivated in gardens and orchards, where they frequently are the size a walnut. They are rosy pink, but in cultivation they are usually white, especially in the north where their natural color is maintained only the first year.  They are the first fruit eaten in spring and by December vendors on horses and mules bring great baskets and sell them in the streets at very low prices.  It is also the custom to make festive trips to rural gardens in the countryside to eat them, especially to the little town of , near , long famous for strawberries. [9]

These Mapuche strawberries are still cultivated in , though no longer in Renca, and on a much smaller scale than the common commercial varieties.  In the community of Purén, of , some 25 small scale growers annually produce some 16,000 kg. with great success:

We are in full harvest and have great demand for the product. The prices are very good; here in this zone were are selling at 5 thousand pesos a kilo [$4.50 US/lb.] and in other regions we have been paid up to 7 thousand a kilo” said grower, Aurelio Carvajal.[10] 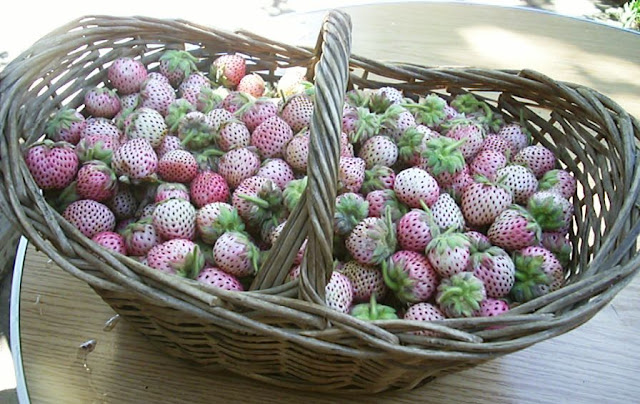 White strawberries of Purén. The Purén Strawberry Festival is in mid February.
Origins of the modern strawberry
As George Darrow explains in The Strawberry: History, Breeding, and Physiology, Amédée François Frézier, a French engineer and Lieutenant Colonel of the French Army Intelligence Corps, was sent to Chile in 1712 as a spy with orders to “make Hydrographical Observations for the Use of Mariners, and for the Correction of the Charts, and also to take exact Plans of the most considerable Ports and fortresses along the Coasts” while passing himself off as a merchant captain.  On his journeys he visited Concepción, where he encountered the Mapuches’ strawberries:

….they plant whole Fields, with a Sort of Strawberry Rushes, differing from ours, in that the Leaves are rounder, thicker and more downy. The fruit is generally as big as a Walnut, and sometimes as a Hen's Egg, of a whitish Red, and somewhat less delicious of taste than our Wood Strawberries. I have given some Plants of them to Monsieur de Jussieu, for the King's Garden, where Care will be taken to bring them to bear. Besides these, there is plenty in the Woods of our European Kind. And in Short, all manner of Garden-Product among us, grow there plentifully, and almost without trouble.[11] 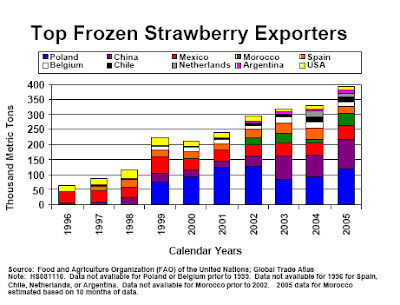 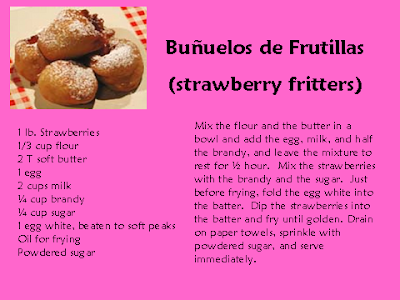 And Kuchen de Frutillas, Strawberry Kuchen (a recipe in English) 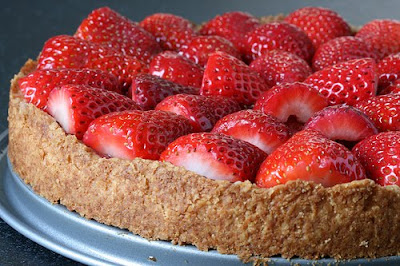