Chili in Chile is Ají

It is a little confusing, but , the country, has no relation to chili (or chile), the pepper (Capsicum sp.) The name of the republic probably came from the Inca, and referred to the name of a local chief, …or a local valley. Or perhaps it came from the language of the Mapuche, in which there are several similar words, of various meanings, that the Spanish might have been adopted.[1] Or perhaps…

…perhaps I should return to the subject:  Chili, the pepper; in , the nation; is called ají (pronounced ah-hé).  Ají (or axí in older Spanish) is from the language of the Taínos, the aboriginal peoples of the Antilles where landed. In 1526, Fernándes de Oviedo in his General and Natural History of the Indies wrote:

Axí is a very well known and used plant in all parts of these Indies, islands and mainland, it is very useful and necessary because it is hot and gives very good flavor and is appetizing with other foods, with fish as much as with meat: and it is the pepper of the Indians, and they make much use of it as there is an abundance of ají [sic] because in all their farms and orchards they plant it and raise it with great diligence and attention,… And it is no less pleasant to the Christians, nor do they use less of it that the Indian because besides being a very good spice it gives good flavor and heat to the stomach; and it is healthy, but very hot this axí.[2]

The Spanish who went with Cortez to Mexico found plenty of ají, and called it by the Nahuatl word hilli or xilli—today’s chile. But the conquistadors who came to Peru and ultimately to Chile came by way of Panama, not Mexico. So today the Taíno word ají is used from Panama throughout Spanish South America.

Besides there being no relation between Chile the nation, and chili the spice, today’s Chileans are not overly fond of spicy food (see Do they eat chili in Chile?) and picante (hot or spicy) also means “tacky--lower class.” But here and there among ’s mildly seasoned dishes are a few that will satisfy your cravings for spice. 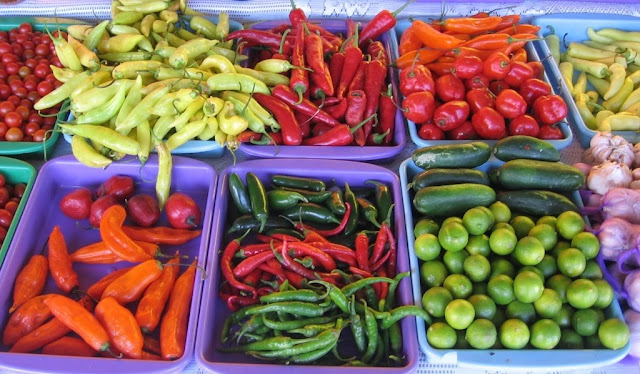 The basics, of course, are the chilies themselves, the raw materials.
Here, from upper left to lower right, are the most common hot chilies in :

Among condiments using chilies, the most common are: 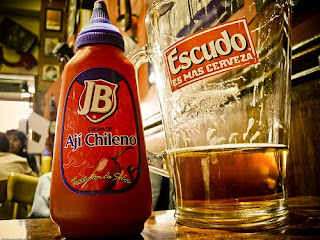 And then there is merkén. 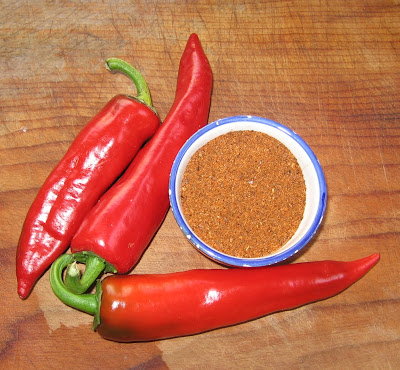 The Mapuche, indigenous Chileans, produce this artisanal spice blend from dried, smoked cabra de cacho chilies, ground toasted coriander seeds and salt, and occasionally oregano or cumin.  It has a wonderful smoky aroma, is only moderately picante—on the order of hot paprika or Spanish pimentón—and can be used, moderating the quantities,  in any recipe that calls for powdered chilies, American chili powder, hot paprika or cayenne.  It is also great as a table condiment, shaken on anything from scrambled eggs to fired potatoes.

Suffering from the double stigma of being picante and Indian, merkén (or merquén) largely escaped the notice of Chilean culinary culture until recently.  It is defined in the 1875 Diccionario de Chilenismos as “a mixture of chili and salt that is carried on journeys to season the meals improvised in lodgings…  in the southern provinces, especially in the communities near the Araucarian frontier.”  But Eugenio Pereira Salas makes no mention of it in his well researched Notes for the History of Chilean Cuisine[3] (1943), and it does not appear in the classic Chilean cookbook, La Gran Cocina Chilena (2000). Now however, in true foodie fashion, it has made the New York Times, which includes mail order sources in the .

…few could have anticipated that one of the ingredients most rooted in the Mapuche kitchen would become a true “hit” of the national high gastronomy.  I speak of merkén, ….which in the last years has occupied a place of honor in the most elegant and cutting edge kitchens of the country.

Merkén stamps its own authentic ethnic seal through the matchless complexity of its flavors and the particular aromas of earth and smoke.  The modern creations based on meats like tuna, lamb, pork or duck (to name some), with that delicate picante touch perfected with the sweet shades of preserves or fruits are, without a doubt, ”a trophy for the senses.”  Its perfume harmonizes splendidly with king crab and other sea foods and is a great condiment in ceviches and tartars.  Potatoes, winter squash, and vegetables are also fine complements, becoming true delicacies when infused with its flavor.[4]


As of now, however, the place of honor that it occupies in those cutting edge restaurants is mostly as a sprinkle of color adding to an elegant presentation, but some are going a cautious step further. 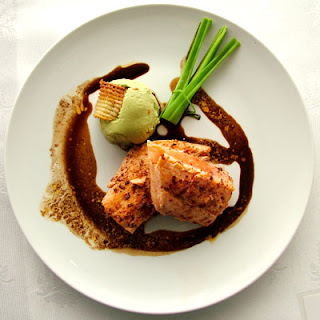 Salmon al merquén. Salmon [Recipe summary:  Dust the salmon with merquén and sear in hot oil.  Reduce balsamic vinegar with a little sugar to the consistency of a sauce.] 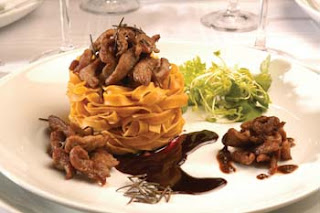 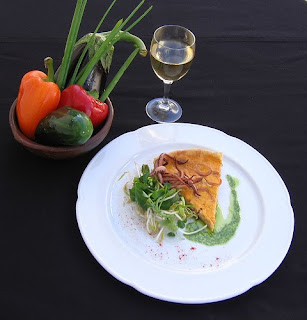 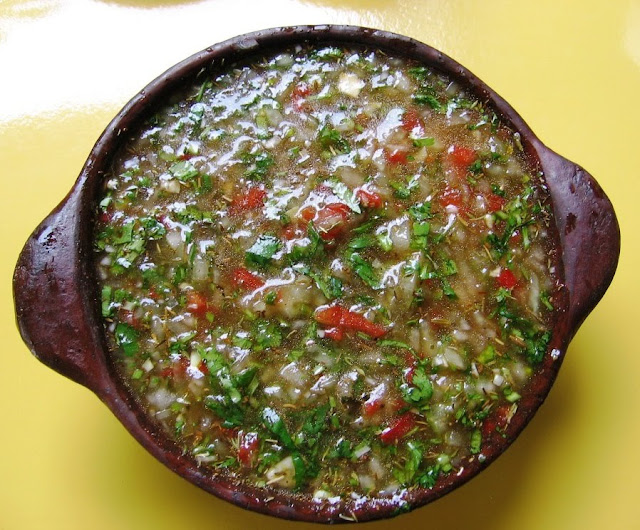 Although very few Chilean main dishes are spicy, a small dish of pebre—a salsa of onion, garlic, cilantro and chili, with a bit of vinegar and oil, and sometimes tomatoes—is served with bread and butter as soon as you are seated at most Chilean restaurants.   It can range from very mild to moderately hot.   It is also served at asados (barbeques) to be eaten with meat, sausages or even on boiled potatoes. 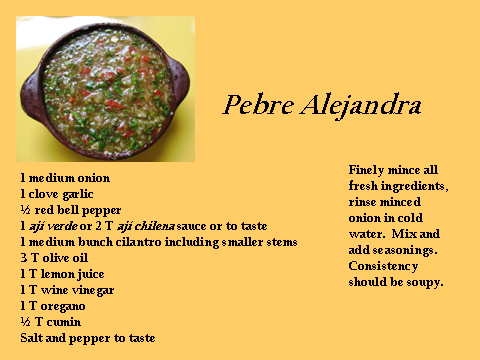 Oh…. and rinsing the onions in cold water?  A common practice; it tones down the onion, more in keeping with Chilean taste.  According to Roberto Marín’s Secrets of the Chilean Kitchen:

Chilean garlic and onions are stronger and more flavorful than those in the rest of the world.  Make them milder by placing the chopped onions in a colander and rinsing repeatedly before use.[5]

Or could it be that Chilean taste is more “refined?”

While the dish itself is fairly straight forward, similar to Argentinean chimichurri and other Latin American table sauces, it’s history is a bit strange.  Zorobabel Rodriquez’ 1875 Dictionary of Chilensmos says:

Pebre:  in pebre is a sauce made to season some foods, made from pepper and other spices.  In it is a dish of mashed potatoes. [!][6]

And so it was. The New Kitchen Manual of 1882 gives this recipe:

Pebre in milk—with a spoon break up peeled potatoes until they are like dough; add milk until they reach the consistency of a pudding.  Heat in a casserole with a piece of butter, and then put in the over to brown.[7]

How the Spanish sauce pebre (from the Latin for pepper) became oven browned mashed potatoes in is a mystery. (If you know, please share.)  But even if Zorababel Rodriquez didn’t know it, it was also a Chilean sauce.  The New Kitchen Manual also suggest that lamb tongue should be served with “a pebre of oil, parsley, bay leaf, mint and vinegar;” not too different from today’s pebre.

What else is spicy in Chilean cuisine?

Not much, at least here in central .  But there are a couple of dishes worth noting, with recipes: