Visitors’ guide: What to eat in Chile

So you’re coming to Chile and you found this blog about Chilean food… great, but it has dozens of posts and would take a month to read.  Not much help.

With that in mind, here’s a guide for visitors.  Since I have written about many of these foods before, there are lots of links to posts with more detail.  (And here’s a link to my Visiting the “Southern Cone”.)

Breakfast:  7 to 9 or 10:00 AM.  Comes with your hotel or hostel room and will usually include bread, a little cheese and/or ham, jam, tea or instant coffee straight or with hot milk, and perhaps a small glass of “juice” (sugary fruit drink).  Hotels catering to international tourists will usually have a full breakfast buffet with eggs, bacon, cereals, toast, pastries, fruit, juices, and so on.  Breakfast is not served in most restaurants. 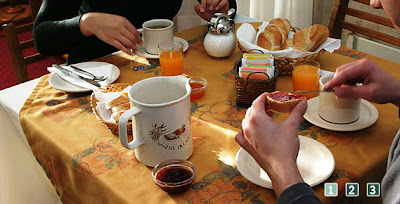 Onces:  5:00 – 8:00 PM. Literally, “elevenses” – Afternoon tea.  The name is said to come from the 11 letters of aguardiente, Chilean brandy or grappa.  Eaten in 80% of Chilean homes and served in hotels, tea rooms, pastry shops and so on.  Consists of tea, coffee, pastries, sandwiches, and avocado (palta), scrambled eggs, jam, etc., to be eaten on bread.
Cena - Dinner or Supper.  8:00 to 12:00 PM.  In restaurants it is a full meal, like almuerzo with the same menu (but no menu ejecutivo).  Only about 30% of Chilean homes have daily cena, but many have a snack (colación) at that time.  (Colación is not a regular meal, but a snack or light meal that a child might eat at 10 or 11:00 AM or a coffee break.  You frequently see signs offering colaciones in working class restaurant windows:  a soft drink and a sandwich or empanada.)

Chilean food has its roots in the foods of the indigenous Chilean Indians and the Spanish. The native Mapuche contributed their staples of corn, potatoes, beans, squash, chili and chicha (fruit ciders).  The Spanish brought wheat, European vegetables (onions, peas, broad beans),  meats (beef, pork and lamb, and chicken), spices and herbs (especially garlic, oregano, cumin and coriander or cilantro) and fats (lard and olive oil), plus their own alcoholic drinks, wine and aguardiente – grappa or brandy.  The two blended into the classic Chilean Creole cuisine.  After the mid 19th century foreign styles became popular, first with the elites and later with urban middle and working classes.  Chili-laden rustic peasant dishes became less popular and French, German and English influences brought international dishes.

Today’s Chilean cuisine is a combination of all the above.  It is usually simply cooked without complicated sauces or seasonings.  Meats are usually grilled or boiled for hearty boiled dinners (cazuelas), fish are grilled or fried, shellfish are steamed or served in soups or bread thickened pudding-like chupes, and vegetables are served in soups or as salads.  The major seasonings are oregano, cumin, paprika, and a little garlic. Foreigners often find Chilean cuisine bland (and Chileans find much American and European cooking over seasoned and strong tasting).

The best of Chilean food:

Sea food.  Fish and shellfish, simply prepared, are the best Chile has to offer.  Congrio (conger or kingclip) is Chile’s favorite and best fish and batter-fried congrio is near the top of everyone’s list of Chile’s best dishes. Congrio is also good grilled and in chowders. The best restaurant dish I ever had in Chile was Caldillo de Congrio, congrio chowder, at the restaurant attached to Pedro Neruda’s house-museum in Isla Negra.  Other Chilean fish (reneta, merluza, corvina, and farm raised salmon) are also good but tend to be overcooked for international taste.  Order them plainly grilled, fried or with salsa Margarita (white wine and shell fish sauce). 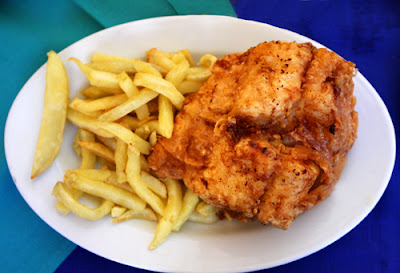 Chile’s most popular shell fish dish is machas a la parmesana, surf clams broiled with Parmesan cheese. Chilean scallops (ostiones) are also very good, a la parmesana, or in other preparations.  Mussels, especially choritos, small mussels, are also excellent.  They are usually steamed and served with green sauce of parsley, onion, and lemon juice, but being very inexpensive, are seldom found in up-scale restaurants.  Other sea food dishes especially worth trying are pastel de jaiba, crab meat pie; and pasta with mixed sea food, which can be very good …or a repository for what didn't sell yesterday.  Fried seafood empanadas of shrimp, locos (Chilean abalone) or mariscos (mixed seafood, usually mostly mussels) are excellent; they make a great first course.

Sea food is available in almost all Chilean restaurants, but is best in moderately priced “fish houses” in coastal cities or Santiago’s Mercado Central.   If you go to the Lake District or Chiloe, have curanto, a “clam bake” style dish (most commonly cooked in a pot) of shellfish, meats, chicken and potato breads.

After seafood, you will surely want to try “typical Chilean” food.  This is not what is typically served in most Chilean middle class restaurants which tend to be more international.  Rather it is Chilean Creole cuisine:  pastel de choclo (corn pie); cazuela (boiled dinner); baked empanadas de pino (filling of ground beef and onion); plateada (pot roast); and porotos granados (cranberry beans with squash and corn) and much more.  These are probably not dishes that will leave your taste buds tingling and make you a life-long advocate of Chilean cooking, but they are good hearty dishes and while in Chile you should try them. If Chilean food may not be the “next Thai,” Peruvian is.  Peruvian restaurants are very popular in Chile.  They come in all price and elegance categories from the huge crowded Ají Seco downtown, a favorite with Peruvian immigrants, to Astridy Gaston, arguably Santiago’s best restaurant -- with prices to match.  Peruvian food is cosmopolitan with elements of Spanish, indigenous Andean, Japanese, Chinese, and Italian cuisines.  It ranges from the mild to very spicy (mild being more common in Chile than in Peru) and incorporates a variety of Asian and Andean herbs and spices absent from Chilean cuisine.  For more information, I wrote about Peruvian food in Chile here. 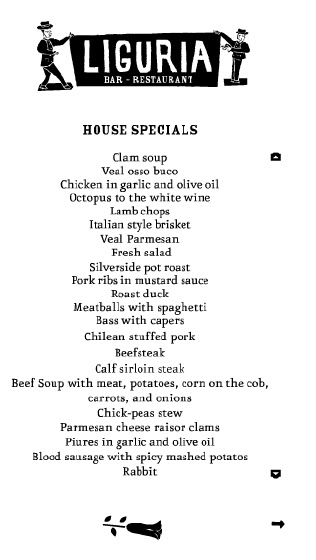 This catch-all category encompasses most of Santiago’s mid- and up-scale restaurants.  They have a combination of traditional Chilean and international dishes. One of our favorites, Liguria in downtown Santiago, is typical of the older restaurants of this style.  Their English menu is at right.

As elsewhere French, Italian, German, Spanish, Argentinean and American restaurants are variable, as are pizza and sushi places.

Chilean sandwiches are a good choice for an inexpensive meal.  Most of the best places are of German-Chilean origin and the best sandwiches are the lomito (roast pork), the churasco (thin grilled steak), the chacarero (either pork or steak with tomatoes and green beans); and among the most popular is the completo, a hot dog with everything.  All usually come “Italiano” (red, white and green, like the flag) with tomato, (over-) abundant mayonnaise, and avocado puré,  making them fodder for knife and fork.  Try asking for them “sin mayo” – without mayonnaise.  See Sánguches by Chilean-American blogger Margaret.
Photo: Travelpod 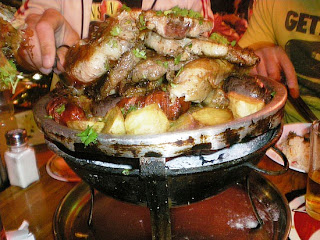 These restaurants, specializing in grilled meats, are very popular and if you are a committed meat eater you’ll probably want to try one. The parilla mixta (mixed grill--right) serving two or more is popular and hard to pass up. It will usually include a couple of cuts of beef, pork chops, sausages, chicken and potatoes—a major cholesterolaso.  Individual steaks and chops will also be on the menu.  Most Chilean beef is grass fed and is tasty, but chewy and expensive.  So don’t look to Parriladas for that special night-out meal.  Wait until you get to Argentina.

Although there are some exceptions, Chile’s ethnic restaurants tend to be disappointing.  Chinese food is very popular and there are large sit-down restaurants and literally hundreds of take-out places, all serving chicken chop suey and Mongolian beef -- without ginger or garlic.  Since Chinese, Thai, Indian and Mexican cuisines use spices that are not to Chilean tastes, their dishes are often toned down to the point of being almost unrecognizable.  One exception is Korean food which is so un-Chilean that it is often very authentic.

Wine, of course, but also beer, pisco, mineral water and soft drinks--and tap water.  It is safe everywhere in Chile.

Chilean wine is good, inexpensive and available almost everywhere.  Moderately priced restaurants will have a variety of wines starting at 6,000 to 8,000 CLP ($9 to $12 US) per bottle, and a limited variety of half-bottles at 3,500 to 6,000 CLP.  Chilean wines are usually labeled with the grape variety (varietales) such as chardonnay or cabernet sauvignon, or as reservas, meaning that the winery considers them special in some way.  This is usually due to hand selection of grapes and/or longer aging in wood.  Varietals sell for 1,500 to around 3,000 CLP ($2.50 to $5 US) in stores while reservas usually start at around 3,000 CLP in stores and go up from there.  They are priced at double to triple retail price in restaurants.  Mid-range restaurants tend to have mostly reservas, but may have a few varietals on the menu.  If they do, don’t hesitate to order them or the lowest price reservas. They are good wines, comparable to or better than the common table wines in Europe.

Pisco is Chilean brandy, made from aromatic grape varieties like muscatel, and the pisco sour is Chile’s favorite mixed drink.  In fact, it’s almost the only mixed drink Chileans order. Have one before dinner.

Mineral water and soft drinks are popular and available everywhere.  Mineral water is commonly ordered along with wine as tap water does not come with meals (but you can ask for it). Coca-Cola is Chile’s favorite soft drink and people drink it with everything from a delicate filet of sole to hot dogs.  Ugg.

What restaurants to choose?

Trip Advisor Chile has extensive reviews of Chilean restaurants in English and Spanish by city, and in Santiago, by neighborhood, cuisine and price level.