In the year of 1560, Don Antonio de Ribera…brought with him from Seville several Olive Plants, which he carefully saved, and put up in two great Jars, and of above a hundred which he had brought, there were but three slips only that were alive, the which he planted in a fruitful Soil and Valley, wherein he having also other fruits, such as Grapes, Figs, Pomegranats and Oranges, Limes and the like…  Don Antonio de Ribera having planted these Olive Trees in his own Land, would not afford so much as one leaf of them to be planted in any other Ground than his own, and for security of them he guarded them with at least one hundred Negros and thirty Dogs, which watched his rich Plantations both by day and night; but it happening out that some persons, more watchful than his Dogs and perhaps by the connivance or consent of the Negros, (as is to be suspected) stole away in the night time one of the three Olive Plants, the which in some time after, was seen to flourish and grow in Chili… and there for the space of three Years afforded many sprouts for divers Plantations, increasing with that prosperous success, that not the least twig was put into the ground but which took and in a short time became a fair Olive Tree.  “The Inca” Garcilaso de la Vega 1609[1]

Thus olives arrived in Chile, assuming that “The Inca” Garcilaso got the story right.  He was writing 30 years later, and the story surely had been told many times as the punch line, below, makes it a great tale:

at the end of three years… the same tree was again restored and replanted in the very same place from whence it had been taken, with that secrecy, and with that dexterity returned that the master could never detect the Person who had robbed him of it.

However olives arrived in , they did well.  Garcilaso reports that by the time of his writing olive oil was already being exported from Chile to Peru, and today, 400 years later, Chile exports over 12 million liters every year, some 35-40% to the United  States.

Chilean olive oil is among the best in the world, 99% is extra virgin, most with a total acidity of .02% or less.  Most is mild, suitable for either salads or for cooking, but more intense varieties are available if you look for them.  In 2011 Chilean olive oil received prizes in 10 international competitions and 13 Chilean olive oil producers received outstanding scores in the 2012 olive oil guide Flos Olei, two of 97/100.[2]  And in contrast to the situation with European olive oils where adulteration, fraud and mislabeling are rampant[3], Chilean oils have been relatively free from scandal.[4]

A bit of history.

Although the Spaniards who conquered had presumably grown up on a diet rich in olive oil, in they turned to a much more available alternative:  beef fat, rendered from cattle that soon roamed the central valley in vast herds. (See Eating Chilean Beef)  Chilean historian Pereira Salas explains that “olive oil had very restricted culinary use in , serving only to dress salads; beef fat was adopted for cooking and is one of the most important characteristics of Creole diet.  What butter is for the French, olive oil is for the Italian or Spaniard, beef fat was for the Chilean”.[5]

But of course there was some production, for both oil and table olives.  Unfortunately, most Chilean olive oil was “fatty, seldom clear and very bad quality, owing to the singular manner in which it is made,” according to French naturalist Caludio Gay, who traveled widely and wrote authoritatively on during the 1830s and 40s.

In June or July they knock the olives to the ground with poles and then they gather them into piles for five or six days, and sometimes as much as a month, and after crushing with stones they put them a portion at a time in a bag and rub them with their hands against a sloping board with water so hot as to be very painful. The liquid is gathered in a tray or other vessel and after it has cooled the oil that floats on the water is removed with a spoon and clarified over a fire. The remaining pulp is thrown away as useless or is used as fuel for ovens, still containing a great deal of oil from the depraved way they have operated.

But there was some good oil. Using mills like those used in Europe the Villuco hacienda, in province, produced the best oil in

…five days after being harvested the olives are ground in a horse powered mill.  The resulting paste is placed in sacks for pressing, first moderately in order to obtain first class oil, and later after mixing with hot water, it is given another much stronger pressing in order to obtain all the oil content, and which is sold as second and third quality. 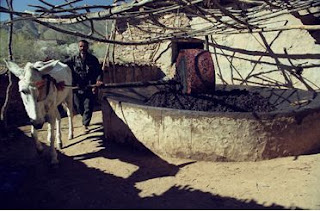 And there was great potential.  Gay thought Chilean olive trees were greatly superior to the scrawny trees in , and:

If Chile devoted itself intelligently to this industry it could supply all the oil the countries of the southern ocean consume and now obtain from Europe; but the tree is slow to grow, yielding a fair harvest only after 25 or 30 years, which is too much for Chileans who are always rushed to pick their fruit soon. This is surely the reason that they have planted so few trees, satisfied with those that exist to produce the oil needed for the country.[6]

By 1869 had about 145,000 olive trees which could have provided only about .4 liter of oil (1 ¾ cups) per person per year.[7] Over 75% of the trees were in , some 400 km south of . But it was in Santiago that the best oil was produced, “with a perfection that puts to shame any foreign oil.  Almost all is consumed within the country as it is greatly appreciated.”[8]

By the 1930s the Chilean population had grown to about 5 million, but the situation was little changed.  There were some 260,000 trees, perhaps two thousand hectares of olives, enough for only about .3 liters of oil per person—1 ¼ cup—per year.  At the same time, was importing some three million liters of vegetable oils per year—now including soy and cotton seed oil as well as olive. To replace this level of imports, Chile would need some 15,000 hectares of olive trees rather than the 2,000 then planted.[9]

But something else had happened.  Since 1990-91 world olive oil consumption had increased by about 1/3 and in the United States, one of Chile’s most important agricultural export markets, people were now using 50% more olive oil, almost all imported.  The foodie revolution had struck!  “EVOO,” catch phrase of TV foodie Rachael Ray  was in the Oxford American College Dictionary.  Olive oil was hot! 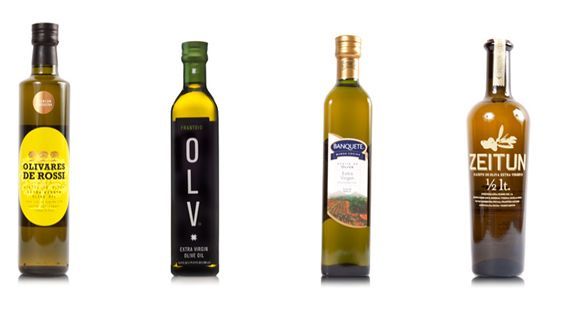 Olives are grown throughout northern and central from oases in the to the Bío Bío region, but most are grown in the central region shown on the map.  The dominant variety of olive, comprising just under 50% of trees and 70% of oil production is the Spanish Arbequina, which has one of the highest concentrations of oil (20-22%). Oils made from Arbequina are generally buttery, fruity, and very mild in flavor, and are used as a base for more flavorful blends. The second most common is the Tuscan variety Frantoil, which also yields high percentages of oil, the best of which is highly aromatic and fruity.  Together these two varieties make up approximately 70% of Chilean production.[12] 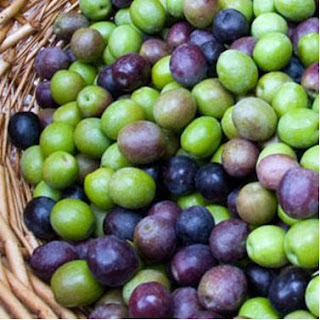 Most Chilean olives are picked using hand-held vibrating rake-like devices that shake them from the branches onto cloths spread under the trees, although some groves are densely planted and pruned for machine harvesting.  The photo below is part of an excellent photo essay covering the process from Cachando Chile: “Chilean Olive Oil: A day on the job” by fellow blogger Margaret. 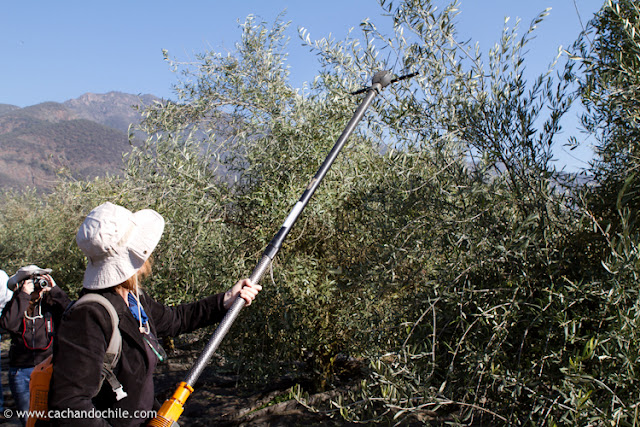 The Chile Oliva web site explains the rest of the process: After harvest the olives are washed and then crushed, usually within 24 hours.  The result is a thick paste which is kneaded or beaten to allow the smaller drops of oil to aggregate for easier separation. To extract the oil the paste is spun, or the solids and liquids are separated and spun separately. The resulting oil is centrifuged again to remove the remaining water, and:

The finished product appears on Chilean supermarket shelves, commonly holding a dozen or more brands, at from about 4,000 CLP (US$8.00) per liter for store brands to 7,000 CLP for some of the best known name and organic brands.  Virtually all is marked “extra virgin” and most is fruity and mild.

But if you prefer an oil with a more pronounced flavor, you may have to do some looking.  My favorite for salads is from Bezma, from the of in northern .  It is not extra virgin oil, having acidity up to 1.4%, and is sold as “Sabor Intenso,” intense flavor.  I don’t use it in cooking, but to my taste it is a great oil for salads.

While olive oil has only recently become popular, and then with a fairly limited portion of the population, olives themselves were common and widely eaten throughout Chilean history.  Writing in the 1840s Gay explained that:

There are two varieties of olives, a smaller one which provides oil in greater quantity and a larger one, used mainly as food.  The consumption of these is very great, above all in the men’s and women’s convents.  To prepare them they are pricked with a thorn and then put in a vessel of water, which is changed twice a day.  Twelve to fifteen days are enough to remove all their bitterness and foul liquid, and afterwards they are preserved with salt and dry cumin. When they are to be used they are dressed with oil, vinegar, and frequently with whole or minced onion. They are always preserved when ripe and thus are black, but some curious persons also prepare green olives, as in Europe, which is not very common as they are liked by very few.[13]

While this traditional method of preparing olives is no longer practiced in Chile, except perhaps by hobbyists for home consumption, olives continue to be popular, with an annual consumption of 1.8 kg per person, about the same as that of Greece and almost 3 times that of the US (but less that Syria, the world leader at 6 kg per person). 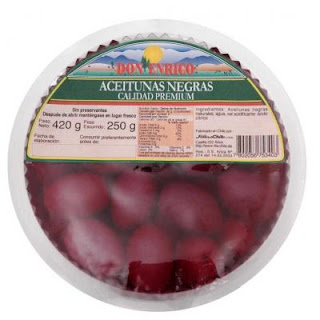 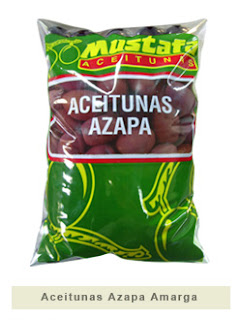 Olives from major commercial processors are available in supermarkets’, in jars, plastic and in bulk, and in bulk from small producers at neighborhood ferias, street fairs, small shops and at La Vega, Santiago’s large public market.  The most common varieties are the green, purple and black types in the photo below. Their colors indicate how ripe they were when picked, and while the green and black are mild, smooth and buttery; the purples (our favorites) always have a trace of bitterness.  All commonly sell for 4000 CLP a kg (US$3.60/lb.) at ferias; more in supermarkets. 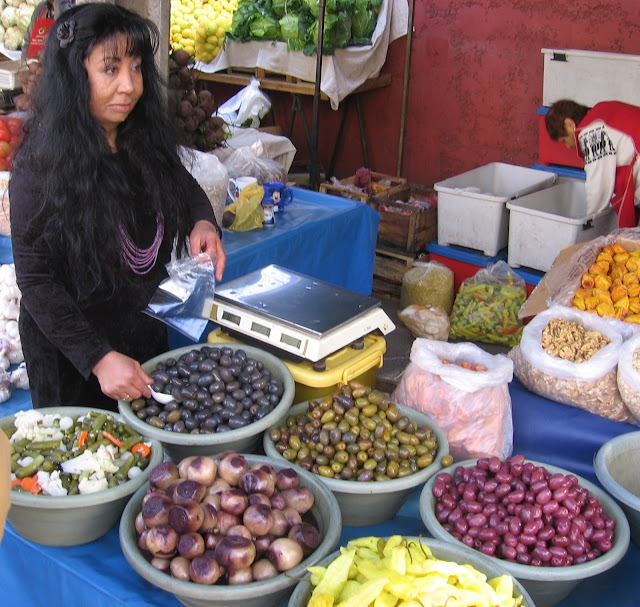 Olives at the feria where I buy mine, along with pickled chilies, onions and mixed vegetables.  In the back are dried peaches, walnuts, garbanzo beans, and fresh chilies.