Yeah, expensive seafood and fish in Santiago;  with 1,500 pesos you get two little fish no bigger than this, they don’t even let the little things grow, for 700 pesos you get five little clams, and for 750 a few mussels, not enough for a poor fish stew.  On the other hand for 1500 pesos you get a DOUBLE GIANT HOTDOG WITH EVERYTHING ON IT, THIS BIG, DRINK INCLUDED. DELICIOUS. HOW WILL YOU FILL YOUR TUMMY????[1] Janis

Sad but true, Chilean fish consumption is less that half the world’s average, down to about 38% of 1995 levels, and fish is more expensive than other meats (see What Chileans Eat: Chilean National Diet).

Why?  Part of the answer is that is the 8th most important fish exporter in the world, with exports of about $2.5 billion in 2006.[2] In January 2010 exported 126,340 metric tons of fish and fishmeal (22%).[3] If we exclude the fishmeal (used mainly for animal feeds) that’s about 6.5 kg. of exported fish per person; a half kg. less that the average Chilean eats in a year.  And assuming January exports are typical, this year’s exports of around 78 kg. per person will be a little over 10 times domestic consumption. 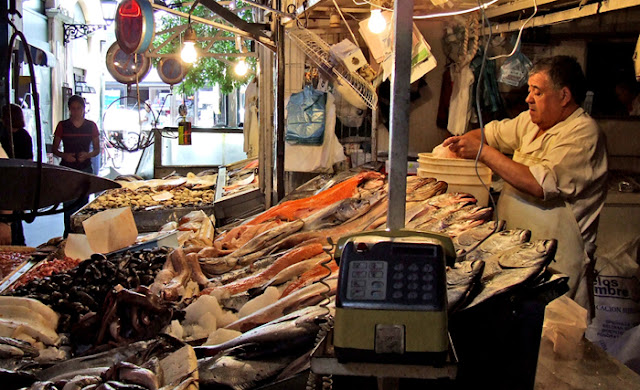 What this means, of course, is that fish buyers are competing with the 99.8% of the world’s population that isn’t Chilean for Chilean fish.   So prices are high; not at the levels of importers like the , and , but still high.

But if you like fish, can afford it occasionally (or frequently), there’s a reasonable chance that you’d like to know more about what’s available.  So….

A shoppers guide to Chilean Fish

Merluza is ’s most popular fish, and among the least expensive, currently around 2,000 CLP a kg.  ($1.80/lb) for small whole fish.  The flesh is white, soft, and mild tasting.  If you order “fried fish” in , you will usually get merluza. If not fried, Chileans usually serve it baked or poached with a sauce.  It’s a bit fragile and tends to come apart in stews and chowders. The smaller of the two merluza species (M. gayi), commonly called pescada in , is often 300 gm. or so whole, appropriate for a single serving as below, but  they may be over a kg. The other species (M. australis), commonly sold as merluza Española in , is usually larger. Merluza are also available as frozen filets.[4] 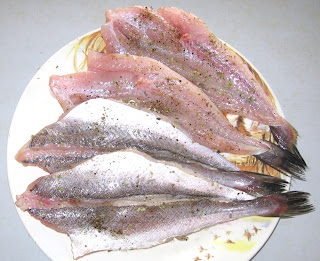 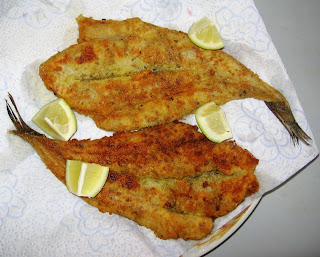 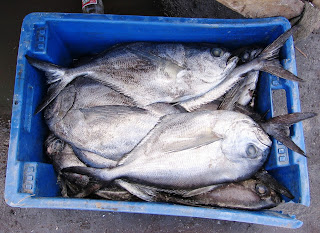 If you like fish on the grill, reineta are ideal.  Grill the whole fish, cleaned but not scaled, and scored through the skin on three or four places on each side, over a medium charcoal fire, for around 10 minutes per inch of thickness (that’s for an internal temp 140° F).  The scales keep the fish from sticking to the grill and the skin can easily be peeled off for serving.  For instructions see How to Cook a Whole Fish. 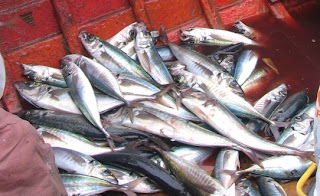 Jurel, is the third most popular Chilean fish, and one of the least expensive.  Like most mackerel, they have oily, strongly flavored flesh and are not for those who only like “fish that don’t taste like fish.” They are usually baked with a savory sauce or broiled. A citrus based marinade can help tone down the flavor. Jurel are among ’s most important fish for export as fish meal, and are also available canned; an inexpensive substitute for tuna. Here are some recipes in English.

Chilean farmed salmon are delicious, intrinsically good for you, and economically important for , but they are contaminated with PCBs, dioxin and other hazardous chemicals, and salmon farms are a serious threat to ’s environment.  (A disease, infectious salmon anemia (ISA), has dramatically reduced production in recent years, though it is no threat to humans.) There is no clear answer as to whether you should eat farmed salmon, and if so, how often (see Eating/Not-eating Chilean Salmon).

Trucha arcoíris (rainbow trout, Oncorhynchus mykiss) is farmed in the same manner as salmon and has the same advantages and disadvantages, thought it is not subject to ISA.

The congrio is the most Chilean of fish, subject of a famous poem by Pablo Neruda, Oda al caldillo de congrio (Ode to Congrio Chowder), translated below by Margaret Sayers Peden.  It begins: 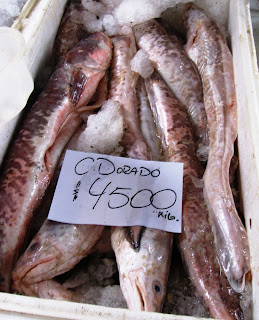 In the storm-tossed
Chilean
sea
lives the rosy conger,
giant eel
of snowy flesh.
And in Chilean
stewpots,
along the coast,
was born the chowder,
thick and succulent,
a boon to man. 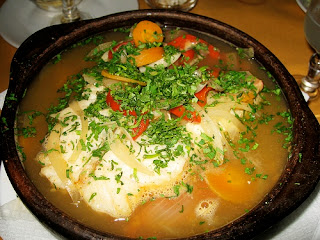 Congrio dorado (G. blacodes)
Congrio are delicious fish, mild flavored with firm white meat, similar to monk fish. It is excellent in stews and soups, baked, or fried.  It can be filleted, but is frequently cut into thick steaks. It is medium priced, presently 2,500(congrio negro) to 4,000 CLP/kg. () and up.

Corvina is a white fleshed, medium flavored fish similar to the redfish or channel Bass of the .  Although it can weigh up to 15 kg., fish of 2 to 3 kg. are common, with both smaller and larger occasionally available. It is priced similar to salmon and congrio.  Corvina is a favorite fish for ceveche, or baked or grilled al la plancha (on a metal plate) and served with a sauce, often a salsa marinera with clams, mussels, shrimp, etc.  It is sometimes translated “Chilean sea bass” on menus, but it is not the threatened Patagonian toothfish. 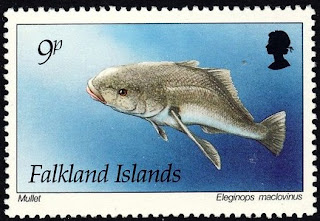 Most abundant in  far southern waters where it is fished on an industrial scale, it is locally available in fillets and as whole fish. It is a white fleshed, mild fish.  Fry or grill a la plancha.

Mild white fish, filets are in the supermarkets at around 4,000 CLP kg.

A long thin inexpensive fish of up to a meter, sierra is a popular fish in , where they are called Snoek.  The flesh is white, with darker strips along the mid lines, and is similar to albacore.  There are a lot of large easily removed bones. Sierra are usually served grilled or stuffed with tomatoes, cheese and sausages for the dish cancato, below. 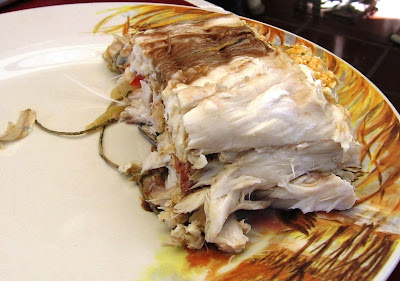 Tollo is a small inoffensive near shore-shark, common (like beachgoers) in the surf on sandy beaches. The flesh is white, mild, boneless, and tasty, though some suggest soaking in milk before cooking.  An ideal fish to serve to children who can learn to like fish with out fear of bones, it makes good “fish fingers.”  It is moderately priced, and usually sold skinned and headless in ferias.

Not the light-meat tuna, albacore, as English speakers expect, but swordfish, albacora is an expensive fish, usually sold in steaks.  It is a popular fish with a “meaty” texture when grilled.

Because it is at the top of the food chain, it accumulates heavy metals and the USFDA recommends that swordfish not be eaten because of high concentrations of mercury.  But if you do eat it, Chilean swordfish, which is harpooned by artisanal fishermen, is preferable to those caught by long-line methods that result in a large by-catch of sharks. 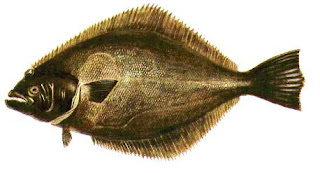 One of the most expensive of Chilean fish, at 8,000 CLP or more per kg., linguado are found in and just beyond the surf on sandy beaches from the Peruvian border south to .  When you see people fishing in the surf with long rods, they are usually fishing for linguado. A delicious, white fleshed, mild fish, eaten fried, grilled, or poached; like Dover sole.

There are hundreds of eatable fish in Chilean waters, so the few I have discussed here are only the most common ones available in .  For some others, and for shellfish, see my other posts on seafood.  And for a more complete list with pictures, see Peces de Chile


Where and how to buy fresh Chilean fish


The best selection, the best and freshest fish and the best prices are at caletas, fishermen’s wharves where artisanal fishermen sell their catch. The fish is absolutely fresh, and there are species that never arrive in metropolitan supermarkets. 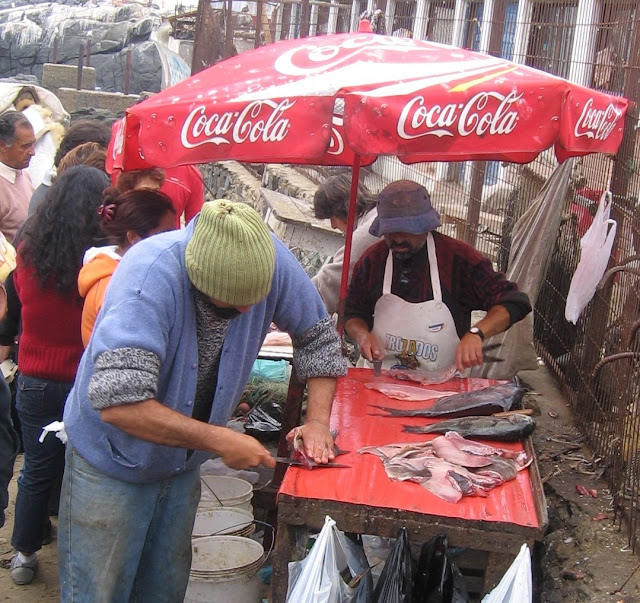 Unfortunately, that’s not usually possible for Santiagueños, so the next best choice is the Mercado Central, in the photo at the top, or neighborhood ferias, like the one below, where I buy almost all my fish. Here’s a list of feria locations. 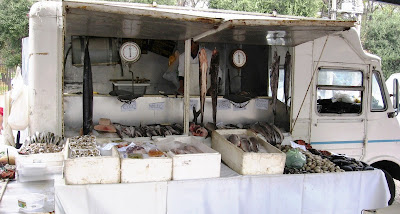 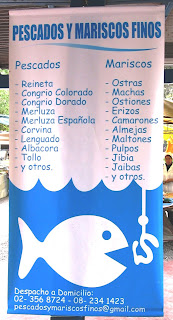 The feria fish sellers know the fish and their customers, and can be counted on to recommend the best buys of the day and how to prepare them. When you buy whole fish the vendors will clean and filet it to your specifications (a tip is appreciated). Feria prices are usually higher than at the Mercado central, but lower that supermarkets, and the fish is fresh; not always the case in supermarkets.

How do you know it’s fresh?

Fresh fish looks alive; the eyes are clear and shiny, the gills are red [5] and the skin is moist and smooth, not dry and wrinkled. Fresh fish smells like nothing; or perhaps like the sea.  If it looks dead and smells like fish, don’t buy it.  At the feria and the fish market you can touch the fish, smell it, and make sure it’s fresh.  At the supermarket that’s not always possible.  And when it’s sold in little trays, filleted, plastic wrapped and “sanitary” you won’t know until you get it home.


And for other Chilean seafood, see these links: