I like fish.  I like to eat them, of course, but I also like catch them, cook them, look at them, and buy them, so fish markets are among my favorite places. And Chilean fish markets are especially interesting since artisanal fishermen bring in a lot of species that never show up in the supermarket.  In the photo below are (l to r) reineta, congrio, merluza, pejegallo (back), blanquillo (front), cabrilla, and jurel.  Hanging in the back are more congrio.[1] In front are unidentifiable filets (at least by me) and, at the bottom right are brilliantly white pieces of jibia (Humbodt squid, Dosidecus gigus). 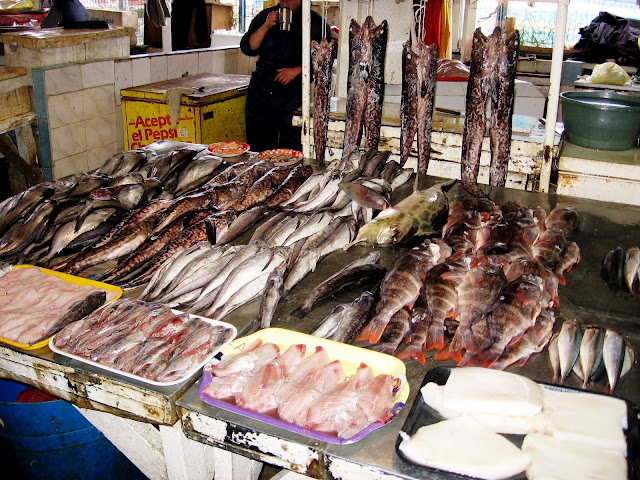 I don’t know when I first ate squid; probably the first time I saw it on a menu.  I’ve always been one of those people whose reaction to an unfamiliar menu item is to order it, and creepy-crawly things are no exception.  Naturally when jibia showed up in the fish case of my local supermarket a couple of years ago, I bought a piece.  It was only 500-600 pesos a kg. ($.50/lb.- it's double that now) with no waste—about a quarter the price of small whole squid, so it occurred to me that it might be a little odd in some way.

“Boil it for 20 minutes, then cut it up and use it in chowder (paila marina), or soup, or anything.”

When I came home I looked it up on the internet and eventually discovered that its English name was Humboldt squid.  Wikipedia said:

Humboldt Squid are carnivorous marine invertebrates that move in shoals of up to 1200 individuals. They swim at speeds of up to 24 kilometers per hour (15 mph/13 kn) propelled by water ejected through a hyponome (siphon) and by two diamond shaped fins. Their tentacles bear suckers lined with sharp teeth with which they grasp prey and drag it towards a large, sharp beak.  They are most commonly found at depths of 200–700 meters (660–2,300 ft), from Tierra del Fuego to . Recent findings suggest the range of this species is spreading north into the waters of  , , , and . They are known to be very aggressive and attack divers that venture too close. 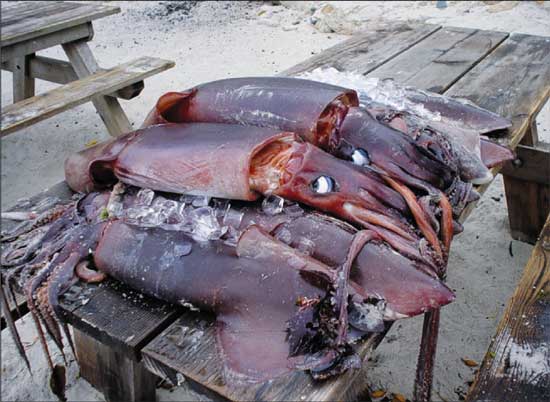 Wikipedia didn’t mention whether they were edible. A squid sport fishing site’s forum, Squidfish, was full of questions about how to cook it.

I just came back loaded down with squid. Great fishing out of .  Now, a question for the forum - I had my first steak tonight - egg wash and seasoned flour. Sautéed it in olive oil for about 5 minutes. Lemon juice on top just before serving. It was horrible. Way too salty. I soaked the tubes in fresh water overnight as I was told to do. Both my wife and I, plus the cats, couldn't eat the steaks.

The issue of how to cook Humboldt squid arose because sometime around 2002 they started appearing and being caught in large numbers by sport fishermen off the coast, north of their previous range, and by 2004 they were in Alaskan wasters.

Squid are mollusks, like clams, oysters, snails and their closer relatives, octopi and cuttlefish. There are around 300 species, most of which are small, under 24 inches, but several species are larger, including the Colossal Squid that can grow up to 46 feet long and weigh over 1000 lbs.  They are carnivores, feeding on fish, crabs and other mollusks, and are smart (Humblodt squid are reported to hunt cooperatively) with relatively large brains for their body size.   Squid are popular in the cuisines throughout Asia and the , and under their Italian name, “calamari,” have become popular in the English speaking world as well.

As explained below, Humboldt squid, also known as “jumbo flying squid,” ”jibia [2]” ( & ), “pota” (), and “Diablo rojo” (red devil) by Mexican fishermen, traditionally ranged from the coast of southern to , and west to .  The dramatic increase in abundance, both within and outside of its normal range is not unprecedented.  Their fast growth, early maturity, short life (1 to 2 years) and migratory ability lead to dramatic fluctuations in population. Off the Chilean coast they were highly abundant between 1835 and 1842[3], when they were first collected and identified by the scientific world. 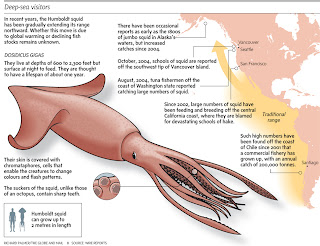 One of the interesting characteristics of Humboldt and other large squid species is that they maintain neutral buoyancy in a way different from the gas-filled swim bladder used by fish:  an ammonium chloride solution, which is lighter than sea water, circulates through their bodies. Unfortunately, this gives the flesh a salty, sour, bitter “horrible” taste, as the fisherman discovered.

But the Chileans have discovered a remedy.  In commercial processing for frozen squid steaks the filleted, mechanically tenderized flesh “is left in soaking in a tub that contains a solution of lactic acid and citric acid to 1 % p/p for 3 hours approximately and with a sufficient quantity of ice to keep the temperature low,” washed again and then “is left again in the second soaking, but this time in a solution that contains a brine to 6 % in a time of 3 hours.”[5]


Back to the kitchen


Fortunately for the home cook without a chemistry degree, there is another method.  The filet of jibia, which is simply a section of the body with the skin removed, is covered on each side by a thin membrane, visible in the lower part of the photo below. 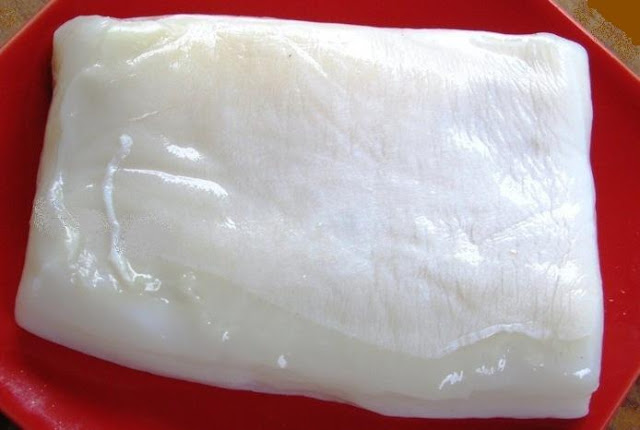 Remove the membrane and simmer the filet in salted water for 10 to 15 minutes, then drain.  This eliminates 90% of so of the odd taste; the rest can be eliminated (or at least hidden) by selecting a recipe that provides its own strong flavors. 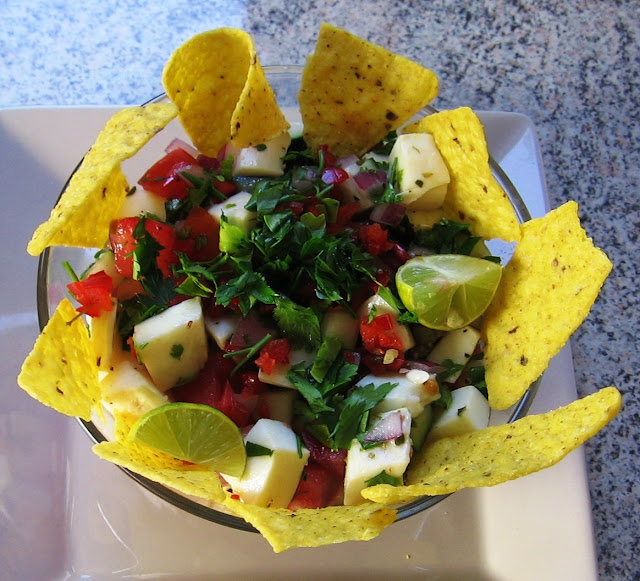 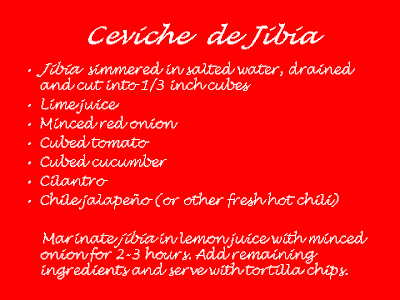 Other good choices (simmered in salt water first) are:  battered and fried as an appetizer; with other seafood in marinara sauce (or with olive oil, white wine, garlic, etc.) over pasta; in paella; bouillabaisse; etc.


And here’s a Chilean recipe:

Simmer the jibia for 20 minutes with salt and a bay leaf, then grind or mince and reserve.  Soak the bread in milk, squeeze out excess, and reserve.  Sauté the onion with the merquén and cumin, add the jibia, the bread and a glass of milk and simmer 10 minutes.  Put the mixtures in individual oven proof dishes (ideally pialas de greda) or a casserole, cover abundantly with cheese and brown in a hot oven, and serve with a sauvignon blanc, preferably from the central valley.

Will you like it?  I think so.  I’ve served the ceviche to guests at buffets several times; they always empty the bowl.