“….in this gay entertainment, they had us go first to supper of some dishes cooked in their style: little cakes, plates of potatoes, packages of corn and beans. They also served many spits of fat meat of the richest taste, brought back from the fire by a boy, spilling the juice all around, bringing them to each one so that he could cut by his hand the meat he thought richest and best roasted. They returned them to the fire and brought others, passing them among all present. The same was done with the other spits of capons, partridge hens and sausages. It was our luck that we ate and drank with great pleasure, relieved of the fast that we suffered in the arduous trip, and cheering the spirits with the repetition of various liquors.” Francisco Núñez de Pineda y Bascuñán, El Cautiverio Feliz, 1673, my translation)

Thus the 22 year old, Chilean-born Spanish soldier, Francisco Núñez de Pineda y Bascuñán, passed an evening in 1629 dining with his captor, the Mapuche chief, Maulicán. He had been captured at the Battle of Cangrejeras, during the War of Aranco (1550-1656), in which the Mapuche, the indigenous people of central Chile, eventually drove the Spanish out of Chile south the Rio Bío Bío. In 1673, 44 years after his six-month (nine-month?) captivity, he wrote The Happy Captivity, and Individual Reason for the Expanded Wars of the Kingdom of Chile (El Cautiverio feliz y razón individual de las guerras dilatadas del reino de Chile), one of the most reliable descriptions of Mapuche culture during this period.
. 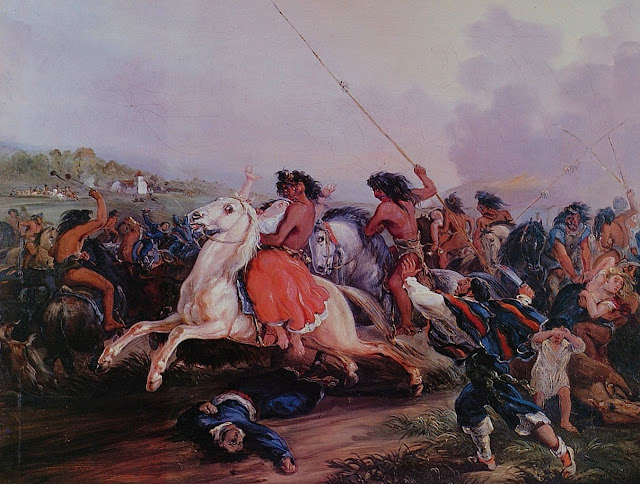 El Malón (The Raid) by Mauricio Rugendas. 1802-1858
.
Francisco was evidently something of a gourmand; he wrote frequently about his food and drink, providing a great resource for those interested in Chilean food history. His account suggests, unremarkably, that the staple foods of the Mapuche were maize, potatoes and beans.
.
Maize (“corn” to North Americans) seems to have been prepared mainly as humitas and mote. On various occasions he spoke of eating “bollos de maíz,” (maize rolls); packages of corn and beans” (envoltorios de maíz y porotos); “rolls of corn and beans, which are the ordinary bread of the people” (bollos de maíz y porotos, que es el ordinario pan de aquella gente); “rolls of maize and beans mixed with the seed… of the “madi;” (bollos de porotos y maíz mezclados con la semilla…. que es el «madi»); “well made tamales of corn and beans in place of bread” (tamales muy bien hechos de maíz y porotos en lugar de pan) and “maize breads which they call umitas and we call tamales” (panes de maíz que llaman «umintas» y nosotros tamales).
.
Assuming that Francisco was speaking of humitas in each of these entries, they often contained beans, and occasionally seeds of “madi,” or melosa (Madia sativa), cultivated by the Mapuche and used as an oil seed into the 19th century. Tamales of maize mixed with beans occur in various areas of Mexico, and quinoa seed tamales are made in Peru, but neither seem to be party of today’s Chilean kitchen.
. 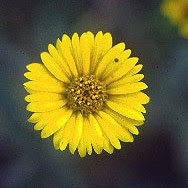 Flower of Madi (Madia sativa)
.
Mote, or hominy (nixtamal or pozole in Mexico), is the other main way that maize was prepared. In this widespread Amerindian technique, maize is boiled in alkaline water, made by adding lime or ashes. This makes the kernels swell and the clear seed coat or hull (pericarp) comes off (and the nutritional value is substantially increased 1 ). The maize is then rinsed several times, and may be ground into dough for making tortillas or tamales, cooked further in soups, or dried. The Mapuche holding Núñez de Pineda gave him, on various occasions, “a plate of mote,” “mote with beans,” and “mote with many achupallas 2 and herbs of the fields that give a good taste to their dishes.” They do not seem to have ground mote into a dough for tamales or tortillas. 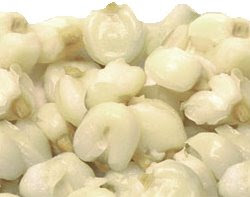 
At least once he was also given a plate of mote de cebada (barley), suggesting that the Mapuche had adapted the mote process to other grains. In today’s Chile, maize mote has almost disappeared, while wheat kernels treated the same way, and simply called mote, have become part of the national cuisine.

In addition to maize, potatoes and beans, Francisco mentions several breads, including tortillas and empanadas. The tortillas were probably not the Amerindian corn tortillas, but something like the tortillas de rescoldos, little breads of wheat flour and lard cooked in the embers, still a common item in Mapuche and rural Chilean cooking. Empanadas, stuffed pastries of Spanish origin, had also entered the Mapuche cuisine by this time. 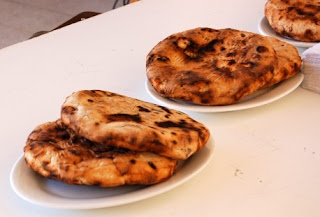 Mapuche tortillas de rescoldos
.
In addition to humitas and mote, toasted flour and “toasted corn flour mixed with quinoa and madi” are mentioned. These Mapuche grain products, similar to Mexican pinole, are mixed with water and sugar or honey (when available) to make a refreshing drink, and are also prepared as a soup.
.
Francisco also mentions fried foods, another borrowing from the Creole kitchen, as frying was previously unknown:

The settlement was very large and spacious with three well supplied cooking fires with spits and skillets where they fried buñuelos  and rosquillas and sopaipillas de huevos [types of pastries] and fresh fish.

Meats mentioned in the Happy Captive include beef, mutton, “sheep of the land” (llama or vicuna), pork, sausages, blood sausage, jerky, bacon, horse meat ("when nothing better was available"), chickens, capons, and partridges (probably the Chilean Tinamou, Nothoprocta perdicaria). Prepared dishes and stews included chicken stew “of their style including vegetables such as potatoes and beans” and, pepitorias (chicken stew thickened with eggs), “cazuela (boiled dinner) so well prepared and seasoned that our cooks could not do better,” fish stews, shellfish stews, and “omelets (tortillas) of eggs with ample honey.” 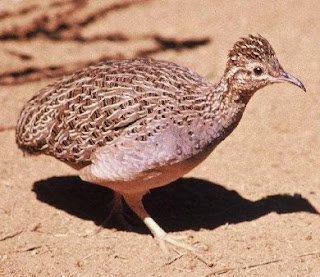 Perdiz Chilena or Chilean Tinamou, Nothoprocta perdicaria).
Finally, there was chicha, the “beer” of the Mapuche, mentioned dozens of times in the text as: “chicha of strawberries, which is the of the most pleasant that they drink,” “chicha of good breeding,” “chicha of dried strawberries, which is the best they drink,” “bitter chicha of apples,” and “chicha with a “mari mari,” whatever that may be. Surprisingly, maize or wheat muday, today’s Mapuche chicha, is not mentioned, though perhaps it was understood when Francisco simply said “chicha.”
.
The importance of chicha to Mapuche feasting is evident in this passage:


To the chiefs they gave splendid food, various dishes of fish, shellfish, fowl, partridges, bacon, sausages, pastries, buñuelos, tomatoes, rolls of beans and maize, and other things, providing for each band according to the people it contained, one hundred or two hundred measures of chicha, because more commonly only twenty or thirty bands came together for ordinary drinking parties and feasts, but in this one there were more than fifty, with a daily consumption of more than four thousand jugs of chicha. A that was not a lot, because there were twelve or fourteen thousand souls at that feast, Indian men and women, girls [chinas] and boys.3