Para español, haz click
Roll piece of dough into a circle or rectangle, add a heaping spoon of a savory or sweet mixture, fold the dough over, seal the edges and bake in an oven or fry in oil.  What is the result?
It's a:
cazone, sromboli, kish, Jamaican patty, Cornish pasty, smbusac, smosa, srudel, bidie, turnover, brek, pgača, perogi, bierock, runza, calzone, panzerotti, jiaozi, mandu, gyōzain, curry puff,  momo, or maybe a Natchitoches meat pie.
In (and most of South American) it is an empanada. 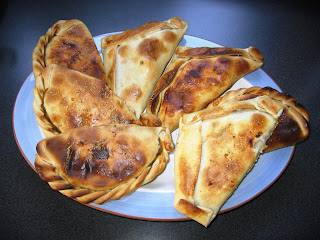 Chilean baked empanadas
Why so many names and varieties?  Practically everywhere that there was wheat--from northern Europe and north Africa to India and China and the whole world by 1700 or so--it was ground and mixed with water to make dough.  And some of that dough was filled with a mixture of meat, fish, cheese, vegetables or fruit and fried or baked. The result was tasty, portable and handy to eat out of hand.
Where and when were these filled pastries first made?  No one knows but, central sometime before the 9th century AD seems like a good bet.

Arab cookery books of the 10th and 13th Centuries refer to the pastries as sanbusak (the pronunciation still current in Egypt, Syria, &amp; Lebanon), sanbusaq or sanbusaj, all reflecting the early medieval form of the Persian word: sanbosag. Claudia Roden (1968) quotes a poem by Ishaq ibn Ibrahim-al-Mausili (9th Century) praising the sanbusaj. [1]

And from there they surely came to with the conquering Arabs, sometime after 711 AD.  Remarkably, they left us a recipe.  It is from an anonymous Andalusian cookbook, The Book of Cooking in and Andalus in the era of Almohads, of the13th century.

A Pie [Mukhabbazah] of Lamb

Make meatballs of lamb with all the spices and flavorings, beat them with egg white, and put into the pot a spoonful of oil, cilantro juice, a spoonful of onion juice and half a spoonful of murri [use soy sauce], and pepper, cinnamon, Chinese cinnamon [cassia], a handful of pine nuts, coriander, a little caraway and a spoonful of water.  Cook until the meatballs stiffen, and cook the sauce and boil two eggs in it, then cover [the contents of the pot with eggs and breadcrumbs] and take it out to the hearthstone [a lower heat] until [the egg layer] wrinkles.  Knead a dough with white flour, water and oil.  Prepare a crust dough of this [line a pan], and put in the meatballs and the boiled eggs, after splitting, and put all the filling inside this.  Then cover it with a sheet of dough made in the same manner.  Fasten it closed and send it to the oven until it is done. Then present it, God willing. [2]

By the 12th century, the pastries were in Christian Spain and were sufficient renowned that they were shown in statues in the cathedral of . 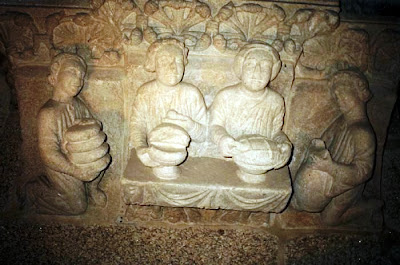 Left:
“Nobles enjoying themselves in a banquet with savory empanadas,” 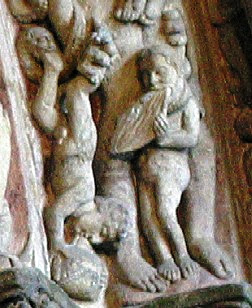 Right:
“penitent sinners in hell… eternally condemned to the tormenting penalty of not being able to eat an empanada because of a leather halter fastened around their necks so they cannot swallow.” [3] 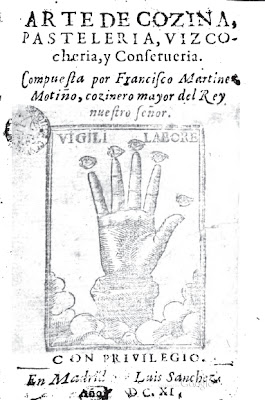 The Spanish added pork, as in this Pigeon Empanada from the 17th century Art of Cooking, Pastry, Cakes and Preserves by Francisco Martínez Montiño (1611), head of the kitchens of Spanish King Philip II (1527-1598): 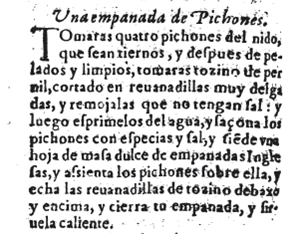 Take four tender young pigeons from the nest and after cleaning them take some ham cut into very thin (slices?) and soak them until the salt has been removed and then squeeze out the water and season the pigeons with spices and salt and (take?) a leaf of English sweet dough for empanadas and place the pigeons on it and put the ham slices all around and close the empanada and serve hot.[4]

Today the empanada gallega (from ) is the classic Spanish empanada and its 16th century ancestors (without tomatoes. peppers or paprika) inspired for the empanadas of and other Latin American countries.  In its basic form it is a large pie (small ones are empanadillas) with a crust of flour, yeast and oil or lard; a sofrito or seasoning mixture of sautéed onion, green pepper, tomato, garlic and paprika (pimenton dulce); and a filling of pork, fish, shellfish or vegetables cooked with the sofrito. A circle or rectangle of dough is rolled out, the filling is spread on it leaving an ample border, and a top crust is applied and sealed by pressing. A hole is made in the center to let the steam escape.  Leftover dough is applied to make a design, it is painted with beaten egg, and the empanada is baked for 30 to 45 minutes in a moderate oven.
THE source for recipes is “La Empanada Gallega: Everything about empanadas and Galician gastronomy”  Google provides a reasonable translation here, and there’s an authentic Galician recipe in English here. 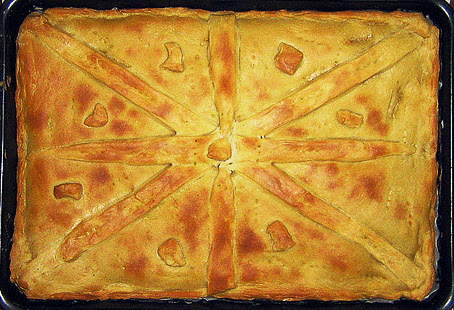 Empanada Gallega    photo: Maria Gonzáles 2007
In her novel Ines of My Soul Isabel Allende tells us that  empanadas arrived in in 1541 with conquistador Pedro de Valdivia and his companion Inés Suárez,  and she may be right.  By the 1620s they appear to have been completely incorporated into ’s Creole cuisine by both Spanish and Indians:  Francisco Núñez de Pineda y Bascuñán ("the happy captive") says that he was given empanadas by his Mapuche captors in the 1620s.[5]
The classic Chilean empanada, with a pino (“filing”, from the Mapuche pinu, for pieces of cooked meat) of meat, onion, raisins, hard boiled egg and chili seems to have taken form during the colonial period and became an “indispensable national dish,"[6] but not one that got mentioned in writing very often.  Even ’s foreign visitors, usually a good source for information about food, seem not to have noticed them.  Only Maria Henrietta de la Cherois, in Over the Andes from the Argentine to Chile and Peru seems to have found them worthy of mention.  She describes them as “squares of thick paste filled with meat, gravy, and a suspicion of onion--Excellent!”[7]
The earliest Chilean empanada recipes I have found come from The New Kitchen Manual of 1882:[8] The recommended dough recipe reflects 19th century ’s abundance of, and taste for, beef fat.  As ’s best know culinary historian Eugenio Pereira Salas explains “what butter was for the French, and olive oil was for the Italians and Spanish, beef fat was for the Chileans.”[9]

Take four pounds of flour, two pounds of beef lard and a pound of beef fat [grasa de vaca], melt the lard and fat and beat until fluffy before mixing with the flour.  Add six egg yokes and enough very hot water, knead for a long time and roll out many times.

Aside from the dough, the standard baked empanadas were similar to today’s, if a little plainer:

Fry minced meat, free from nerves, with a little chopped onion, fried in color [grease mixed with chili] and when the meat is done add a tablespoon of flour, mix well, and add a little water so that there will be enough juice, and leave to cool.  Make a dough with a little flour, burned fat, two eggs and brine; make the empanadas with a little of the pino inside, and bake in a good hot oven.

But there were also empanadas “a la chilena” which were quite fancy:

Mix a little salt, a little cinnamon, six egg yokes and an egg white in a pound of flour, half a  pound of sugar, a quarter of grease and a half cup of sweet wine.  Form a dough from all this and if it is still dry add a little milk and knead it a little.  Cut the raw meat into small pieces and fry with a little color. When the meat is cooked add onions, also fried in color, take it off the fire and add a tablespoon of raw flour; mix and season with salt, whole peppercorns, and a little sugar.  Make the empanadas and decorate the pino with raisins, olives, slices of egg, pieces of firm cooked chicken and onion, also cooked in chicken broth.  Put in the oven and when it is time to send them to the table, pour on a thick syrup mixed with ground almonds and sweetened sour cherries. 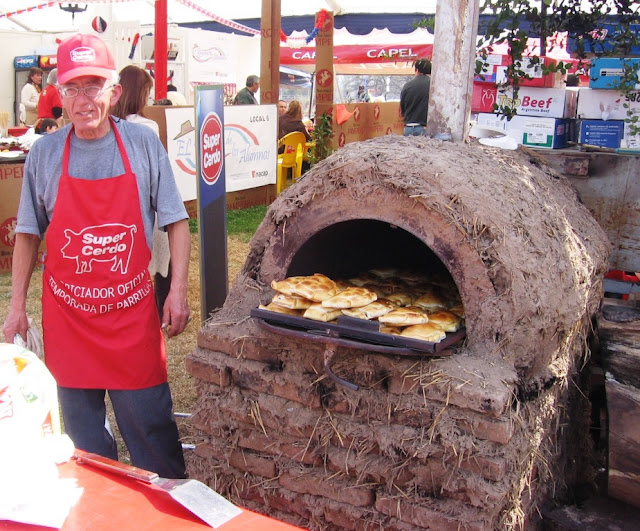 Empanadas a an Independence Day celebration
Baked empanadas filled with beef pino are the most Chilean of foods; there is an empanadaria in every neighborhood, every food store from up-scale supermarkets to barrio groceries sells them, and they are part of every festival and public celebration.  And on Chilean Independence Day, September 18, when everyone eats empanadas, even the 33 trapped Chilean miners had specially made empanadas designed to survive the arduous trip down 700 meters through a narrow bore hole.
The recipe below is a very standard one, from a classic Chilean cookbook, La Gran Cocina Chilena [10]

Make a mound of flour, salt and baking powder.  Make a well in the center of the flour and add the warm melted lard, then the milk a little at a time mixing to form a soft dough.  Knead the dough until smooth, cut into 8 pieces and roll each into a circle.

Sauté the onions ground beef, garlic, chopped parsley and salt and pepper until well cooked.   Allow to cool.   Place a mound of pino on each circle of dough, add a piece of egg, 2 olives, and 3 raisins.  Fold the dough over and seal with a little egg white.  Bake until well browned.

Naturally there are other recipes, some a bit more elegant.  The one below is from La Sazón y el Gusto: Un menu en tres cidudaes de Chile  (Seasoning and Taste: Menus from three Chilean cities) as part of a menu representing . 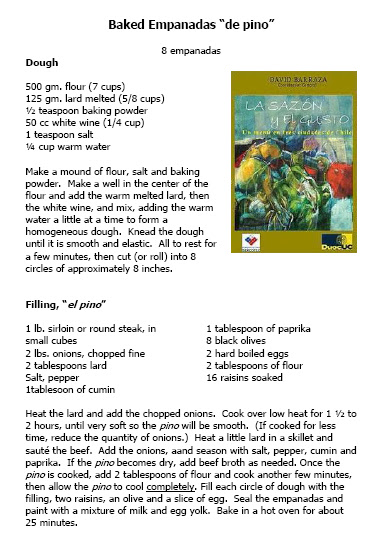 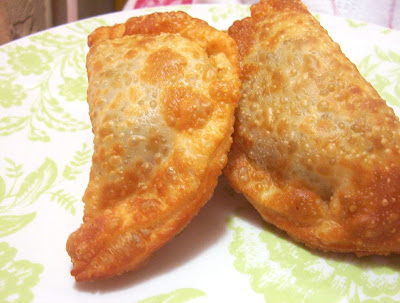 Fried empanadas, usually about half the size of baked, are very popular as a first course, especially in seafood restaurants where they are filled with a variety of shell fish, or with cheese; and of course with home cooks filled with cheese, pino, shellfish, or occasionally with fruit.


The dough, like that of baked empanadas, can be very rich with lard, up to a cup or more for 2 cups of flour, or relatively austere with only a tablespoon for the same amount of flour—in either case frying makes them para chupar los dedos,-- finger lickin’ good.
Here’s a recipe for Fried Cheese Empanadas with dough on the lighter side:

1 cup of hot milk or water

Mound the flour and baking powder and make a well in the center.  Add the melted lard and add the hot milk or water, stirring with a spoon.  When cool enough to handle, knead until smooth, soft, and elastic and wrap in a kitchen towel so that it remains warm.

Roll or cut out circles (to any size you wish, usually between 4 and 8 inches/10-20 cm top with a slice of cheese (queso chanco if available), fold over and seal.  Fry in hot oil until golden.

And for shellfish empanadas, the ones in the photo above, there is an excellent illustrated recipe at Comida Chilena.  Here’s a translation:

Steam the mussels in a little water and white wine until they open, about 2 minutes.  When cool, remove from shells and simmer with the onions and a little of the reserved steaming liquid until the onions are soft.  Fill each circle of dough with filling, leaving an ample border.  Paint the border with water or egg white, and seal.  Fry in abundant hot oil until golden.  Remove from oil and drain on paper towels.  The should be nice and juicy inside.