Meat is often served grilled, or asado, as in and covered in pebre, a condiment similar to Mexican salsa. Lamb, beef, and pork are the most common meats, chicken being considered inferior, though it too is consumed. The Traditional Diet of Chile, LifeSpot.com.

Many recipes are accompanied and enhanced by Chilean wine such as Curanto.  Gourmet Girl Magazine

Interesting quotations, though not especially useful in understanding the Chilean diet: pebre is not served “covering” grilled meat; lamb is the least common meat in Chile[1]; chicken is Chile’s most important source of animal protein[2]; Peruvians and Mexicans eat more seafood than Chileans[3]; and curanto is not a wine, but a clam-bake of shellfish, meats and potatoes.

But what do Chileans eat?  “Typical Chilean foods” like cazuela, pastel de choclo, humitas, and porotos granados (boiled dinner, corn pie, tamales, and shell beans with corn and pumpkin) are certainly popular, but are they what Chileans eat every day; major sources of calories and proteins and fats? 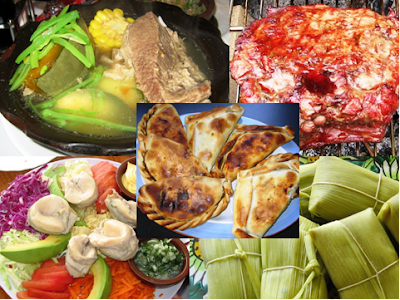 It’s not easy to find out, for or for other countries. The major sources of information are dietary surveys, typically of some portion of the population (school children, the elderly, indigenous people, etc.); household expenditure surveys, showing the estimated percentage of household expenses on various food categories; and national food production and import/export data: production + imports – exports – waste = “consumption” (more or less).  Keep in mind that the mass of “facts” and figures you read here (or in other places on this topic) should always be preceded by “more or less,” it’s not rocket science.  [Note: For a less academic discussion of what Chileans eat, see Eating Chilean: Gastronomic Geography of Chile] 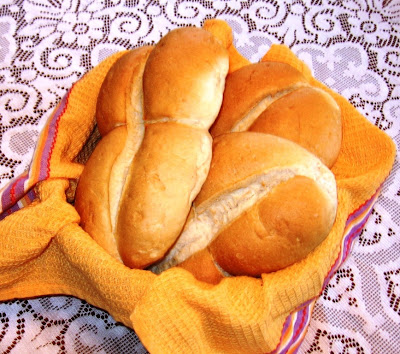 Chileans eat more bread than citizens of any other country except , an average of 208 kg. (458 lbs.) per household per year.[4] And families in the poorest 20% of the population eat even more, 228 kg. (502 lbs.)  Data from 1997-98 show that the average household spent 9% of its food expenditures on bread, and the poorest 60% of households spent more on bread than on any other single food, averaging 13%.[5]  Most of that bread, almost 97%, is bakery style “French bread” (marraquetas [photo] and hallullas) sold by the kg.; packaged loaf bread makes up only 3.4% of sales and whole wheat bread was bought by only 28% of households.[6]  In addition Chileans spent an average of 4% of their income on other wheat products, pasta, cakes, cookies and crackers, and about 1% on rice (no data for corn, oats, etc.)  Thus, bread and other cereal products provided 39% of ’s calories (down from 48% in 1961) and about 14% of their food expenditures.  For comparison, the contribution of grains to diet is 24%[7]

Why so much bread?  It’s good; it’s (relatively) cheap at 700 to 1000 CLP/kg $.65 to $.90 lb.), and it’s very much a part of ’s food traditions.  Breakfast is bread, and perhaps ham or cheese; bread is usually served with almuerzo, “lunch” the largest meal of the day; onces “tea” eaten from 5:00 to 7:00 PM  is usually a sandwich on bread; and cena “supper” eaten at 9:00 or later usually includes bread.[8]  An adult man can easily eat 3 whole marraquetas a day, at about 430 calories each, totaling about 1300 calories; 45% of a reasonable caloric intake for a moderately active man.  (And for an excellent history of Chilean bread, see Criss Salizar's blog Urbatorium) 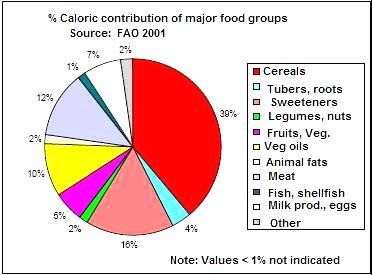 According to FAO data[9], the second major food category in Chilean diet is sugar and other sweeteners, providing 16% of calories ( 19%).  Sugar comprised an average of 1.3% of household food expenditures, an additional 7.1% went to carbonated beverages, and 1% went to powdered drink mixes for a total of approximately 8.5% for sweetened water (and a little flavoring).   Chilean soft drink consumption, estimated at 95 lt. per person per year in 2006[10] was still relatively low; consumption was 216 lt. In 2002[11]


Third after bread and sugar, Chileans eat meat, poultry and a little fish, together making up 13% of calories ( 14%) and 19% of their food pesos in 1997. The most popular meat was beef; all 5 income groups spent from 8 to 10% of their food budget on beef.  Chicken is the second meat, accounting for almost 6% of expenditures in the poorest group and 3% in the most affluent.   Next are “cecinas,” cold cuts and sausages, usually pork, commonly eaten with bread for breakfast or onces.  The average household spent 3.3% of its food money on ceninas.  Fresh pork was next to last, representing on average only 1.1% of expenditures; and surpassed only fresh fish, at 0.8%.  Lamb, with consumption of less that .5 kg. per person per year in , didn’t make the chart.[12]

Domestic consumption of poultry meat grew another 11 percent in 2006 and became the most important source of animal protein in , mainly as a result of the higher prices of beef during the same period of time, which resulted by a significant fall of beef imports. Per capita consumption of poultry meat in 2006 was 33.9 kilos, followed by pork with 22.5 kilos and beef with 22.0 kilos.[14]  (For more see Eating Chilean Beef )


What Chileans eat 4: Fats and oils


Vegetable oils and animal fats added to foods provided 12% of Chilean calories in 1997. This is actually a relatively low percentage; comparable figure for the is 22%. And total fat consumption (including fats naturally occurring in foods) is estimated to be at 78 grams per day, 30% of calories—the percentage recommended by the American heart Association. But fat intake rises with income, and this data is from 1997 when Chilean per capita income was only about 60% of what it is today.[16]

Chilean households spent, on average, 1.7% of their food expenditure on vegetable oil; animal fats and margarine expenditures were too low (<.8%) to be included in the data.  Chileans use vegetable oils in cooking, and to season salads and boiled potatoes. Fried potatoes are very common on restaurant menus; and one survey reported that 26% of Chileans ate two or more high fat foods (mayonnaise, cheese, fried potatoes or other fried foods) per week.[17]   Mayonnaise is very popular; Chileans are said to be the greatest mayonnaise consumers per capita in and third in the world.

The most common oils in are soy bean and sunflower oil.  Chilean olive oil production is only about 1/10 of a lt. per person per year.[18]

What Chileans eat 4: Fruits and vegetables, potatoes and legumes. 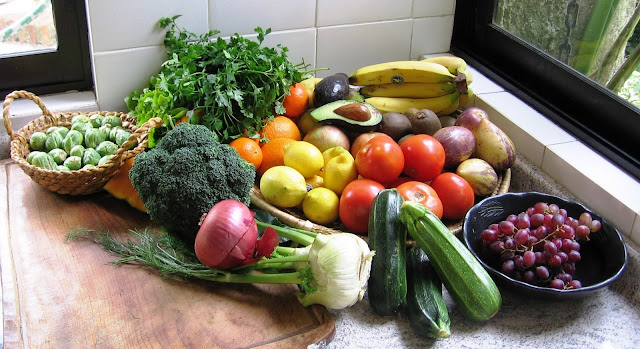 Late summer fruits and vegetables from the feria, farmers market.

Together these three food categories contributed 11% of Chileans calories in 1997 (fruits and vegetables, 5%; tubers and roots, 4%; and legumes, 2%). (Only potatoes (1.8% of expenditures) and tomatoes (1.5%) were included in the expenses chart, of items 0.8% of food expenses or more.)

Data on fruit and vegetable consumption is relatively difficult to find, but a 1997 survey of 871 adults in Santiago found fruit consumption to average 83 gm per day (30 kg. per year) for men  and 140 gm (51 kg./year) for women.  Vegetable consumption was 190 gm (69 kg/yr) in men and 178 gm. (65 kg/yr in women.  Slightly fewer that 50% of men and women consumed recommended quantities of vegetables and only about 30% consumed as much fruit as recommended in dietary guidelines.[19]

The most popular annual frits and vegetables in terms of area planted are corn, lettuce, tomatoes, onions, squash, artichoke, melons, carrots, green peas, watermelons, green beans, shell beans, and asparagus, all of which were planted on over 2,500 hectares (6,200 acres) in 2007.  The most popular perennial fruits were table grapes, avocados, apples, plums, peaches, olives, walnuts, blueberries, kiwifruit, oranges, lemons, raspberries, almonds and pears, each of which was planted on 5,000 hectares or more.[20]

But these data can be misleading; exported 65% of its fruits and vegetables in 2003 (up from 40% in 1995; resulting in a 22% decrease in domestic fruit availability in spite of increased production[21]), so production choices reflect export preferences rather than simply local ones.  Never the less, all the fruits and vegetables above are regularly available in local farmers markets, most at very reasonable prices; blueberries and raspberries show up in small quantities and are expensive.

Potato consumption in averages 55 kg per person per year[22], considerably higher than the Latin American and world averages (21 kg. and 31 kg. respectively), but lower than N. American (60 kg.) and European averages (88 kg.)[23]  A choice of puré (mashed potatoes), plain boiled potatoes, or French fries, is usually available with any main course in Chilean restaurants.

Legumes, primarily beans and lentils, are very much a part of ’s culinary tradition, as reflected in the popular saying “more Chilean than beans.” (See  Eating Chilean Beans: Porotos Granados and others)  In 1935 the Chilean journal Social Service published “A study of the situation of one family” which included estimates of monthly expenditures, including “10 kg of beans.”[24]   But they now provide only a very small proportion of ’s calories, 2% in 1998. In 2006 annual consumption of dry beans was 1.5 kg per capita, down from 4 kg. 15 years earlier.[25]  In 1997 household expenses for beans were down 45% from 10 years earlier, and were not listed in the food expenditures survey report, presumably because they were below the cutoff at 0.8% 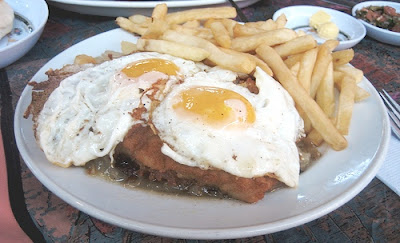 Eggs are not a part of the Chilean breakfast, but they are popular at other meals.  Lomo a lo pobre (literally “steak, poor man’s style”, i.e. topped with fired eggs) is on virtually every menu and almost anything can be ordered a lo pobre, (including pizza).  Tortillas, omelets with eggs and potatoes or vegetables are also common almuerzo and supper dishes.

What Chileans eat away from home.

Photo: Chile Hoy
“70% of TV ads for children are for fast food” 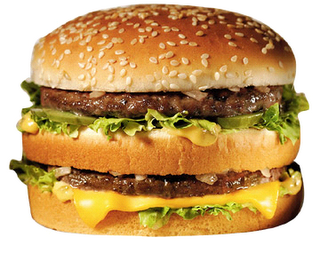 The 1997 food expense survey (Crovetto M. & M. Mirta. 2002) also asked about meals eaten away from home.  The most common was almuerzo, eaten between 1:00 and 3:00 and traditionally the main meal of the day.  The average household surveyed spent 10% of their food pesos on these meals, increasing regularly form 3% in the poorest 20% of households to 17.7% in the most affluent.


In the two lowest quintiles, lunches and meals away from home would be meat-filled empanadas; a completo Italiano [hotdog with mayonnaise, avocado and tomato]; humitas [tamales]; sopapillas [fried breads]; chicken with French fries; or a fast food combo with cheese, mayonnaise, catsup and a carbonated drink.  For the third quintile, a light lunch would be an empanada and tea; a completo and tea; chicken with French fries; or a cheeseburger, drink and French fries.  For the fourth quintile it would be chicken with French fires, Chinese food, pizza, or a hamburger with avocado and tomato, and a drink.  The most affluent quintile would have a menú ejecutiva [“executive lunch,” a set menu of first and main course, dessert and often a drink, beer, wine or bottled water], lomo a lo pobre, chicken and French fires, pizza, or a vegetarian plate.  All these accompanied by tea, coffee, carbonated beverage or juice, and in the case of the sandwiches and French fries with mayonnaise or catsup. (Unless otherwise noted, all translations are mine)


Chile is among the top five nations leading the world in childhood obesity, according to new statistics released by Junaeb, a Chilean organization focused on children and education.

Approximately 18% of Chilean students are obese, compared to the current rate of 16% in the That has surpassed even the in levels of childhood obesity particularly worries health experts, given that the is generally said to be suffering from a national "obesity epidemic."  This announcement follows a report this week by Nutrimóvil of Nestlé that residents exceed a healthy body mass index by an average of three points. The study attributes 's obesity problem in part to the sedentary lifestyle many residents lead.

An astounding 91.2% of Chileans said they never participated in any form of physical activity, according to the 2000 National Health Survey, released in 2003. The study also found that 61.3% of Chileans are overweight.[32] 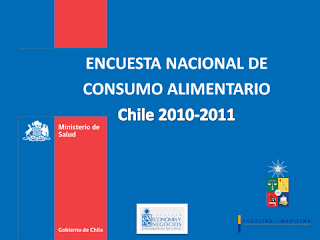 A Power Point summary of The Chilean National Food Consumption Survey of 2010-2011 (Encuesta Nacional de Consumo de Alimentos 2010-2011)  Aafter reading this post you won't find too many surprises, but it's good to have more recent data.