Beans – Porotos granados and others

For the working man
There’s nothing like the blond bean (poroto bayo)
It provides happiness and vigor
And strength like a horse (caballo)
Chilean folk saying[1]
During a trip to Chiloe when I was new(er) to , a group of laughing gypsy women and girls approached my wife and me, asking for money.   I wittily (or so I thought) responded in English:  “Sorry ladies, I have no idea what you are saying.”  To which one responded, ”Puuucha… eres mas chileno que los porotos.”  (“Damn, you’re more Chilean than beans.”)  I was flattered—no one hearing my Spanish would think I was Chilean—and amused to hear this classic Chilean expression.
Since beans have been Chilean and Chileans have been bean eaters for about 5,000 years[2], the saying has merit.  When the Spanish entered two bean species were being grown, porotos and pallares (respectively common beans, Phaseolus vulgaris, from the Quechua purutu; and beans, Phaseolus lunatus from the Quechua, pallar). 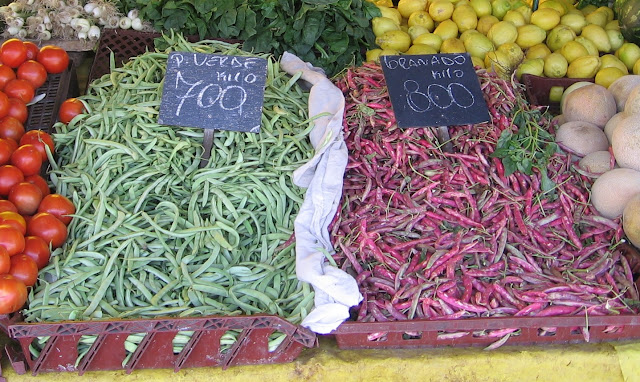 Chilean green beans and cranberry beans, pototos verdes y granados
The Jesuit, Juan Ignacio Molina (1740-1829), writing in his 1787 Compendium of Geographic History, Natural and Civil, of the [3], tells us:

5. The Degul or Phaseolus vulgaris. Before the Spanish entered Chile, the Indians cultivated various species of beans, little different from those in Europe, and among them one notes that one with a straight stalk, that the Indians call cudihuelo, and thirteen climbing varieties, of which the most notable is Phaselous pallar [lunatus] for its seeds of close to an inch; and the borricales,  Phaseolus asellus [vulgaris] whose grains are spherical and buttery.

The Spanish quickly adopted them and porotos became a staple of the Chilean diet for the next 300 years or so, so common that visitors invariably commented on them:

….the peasants form their little chacra, or cultivated spot, for pease, gourds, melons, onions, potatoes, French beans (which dried as frixole¸ forms a main article of their food) and other vegetables. Maria Graham, 1824[4]

….next is the Chilean staff of life, (frigoles).  Kidney beans are the almost constant food of the Chilean laborers, and are to be found at the conventnal [sic], as well as at the tables of the richest inhabitants who deign to eat their “porotos,” (one of the numerous names for the bean). Thomas Sutcliffe, 1841[5]

Chilean consumption of beans is great, serving almost exclusively as food for the miners and peons who work in the cities or the countryside.  For this reason they cultivate them abundantly both in dry and irrigated fields.  …legumes are frequently preferred over meat because of the great abundance and low cost that they are found in . Claudio Gay, 1865[6]

By the beginning of the 20th century, the diet of working class Chileans begins to be documented by scholars, providing more reliable evidence than the earlier anecdotes. In 1903 students of political economy Guillermo Eyzaguirre Rouse and Jorge Errázuriz Tagle (both later to be elected to the Chilean legislature), published their carefully researched Monograph of a Working Class Family from Santiago.[7]

The basis of the family’s diet is legumes and cereals, such as beans and wheat, and drinks such as tea and coffee.  On most days food is limited to what is strictly necessary to maintain strength, but on some there are great quantities of a single food that we could consider superfluous, if it was not the only thing they ate.

Their three daily family means consisted of a breakfast and supper of coffee with milk (when available) and bread. The main meal, comida, eaten at mid day, was invariably a soup or stew including beef (lamb on Sundays) and vegetables, followed by a

The (limited) evidence form the 1930s suggests no change. In 1935 the journal Social Service[8] published “A study of the situation of one family” whose home was described as “…very poor, there are no chairs to sit on and the mattresses are made of straw. Needs cleaning.” The daily diet for the family of six was reported as:
Breakfast—Coffee with milk, 1 bread per person
Dinner [almuerzo]—1 soup/stew [cazuela], 1 plate of legumes
Tea [onces]—Tea with milk, one bread per person.
Supper—Heated leftovers from dinner.
The family’s largest reported food expenses were bread and meat (at $45 each), followed by potatoes, sugar (15 kg.), milk (1 lt. /day), lard, tea, and beans (10 kg.) ($10).
The 1940’s present no improvement, and possibly a decline.  A 1941 study from the same journal found that among 24 families of industrial workers in the area 67% had diets of “second or third class,” defined as lacking meat or milk; and among 26 families of agricultural workers in the same area 84% subsisted on second or third class diets.  Although the methodology is far from modern standards, it’s likely that a majority of these families, like their predecessors, were subsisting largely on grains, tubers and legumes—bread, potatoes and beans, plus sugar and lard.[9]
Disappearing Beans

But in the 21st century, things are different. With the return to democracy and reduction in poverty levels from 45% in 1987 to under 20% today, Chile has experienced a “nutritional transition,” from hunger to obesity.[10]


The progressive rise in overweight and obesity is especially prevalent in low-income groups who improve their income and subsequently buy high-fat/high-carbohydrate energy dense foods.  There is a marked consumer preference in the urban supermarket for sweet and salty high-fat foods; intake of these increases to the detriment of grains, fruits and vegetables.[11]

And especially of beans.  ’s dry bean consumption is now estimated at 1.4 kg. per person per year, approximately 1/3 what it was in 1990, and roughly half the consumption of 3 kg. per capita  (Mexicans average 11 kg./year, Brazilians 18 kg., and Nicaraguans 25 kg.).
What accounts for Chilean’s abandonment of their beloved pototos?  Pascal Leterme and L. Carmenza Muũoz, writing in the British Journal of Nutrition suggest a number of factors.[12]  Increased incomes allow people to buy more meat, which beans traditionally replaced, and increased urbanization, more women in the work force, and long work days away from home have reduced cooking and made processed and fast food more attractive.  And of course, beans (and flatulence) are associated with rural life and the poor; associations status conscious Chileans prefer to avoid.
But all is not lost.  Beans are still with us, at least occasionally.  This week my wife made porotos granados[13], shell beans with squash and corn.   She started with frozen beans, but not even a slow-food Luddite like me would complain. 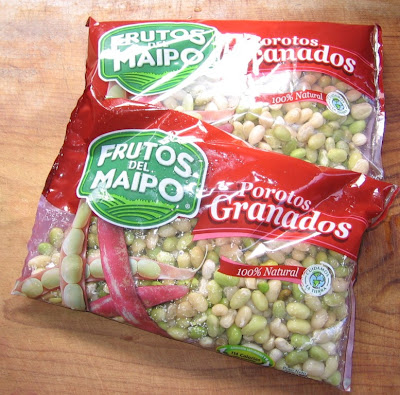 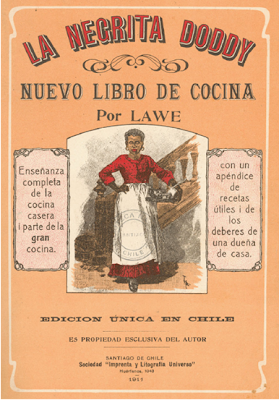 Her recipe is very similar to the one published in the 1911 Chilean cookbook La Negrita Dotty :

Shell one liter of beans [about 1.5 kg unshelled or 640 gm shelled] and cook in salted water. When they are cooked add: corn cut from two ears, a tablespoon of minced onion, chopped winter squash, calculating that it should be about 1/3 the quantity of the beans.

Salt again and add 50 grams of lard and cook slowly, with little water.

They should be thick; if they are too thin you can add a thickener of flour dissolved in 30 grams of lard lightened with the bean cooking liquid. 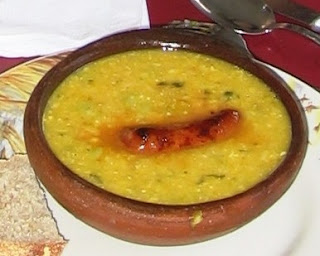 My wife cooks the onion in the lard (yes, lard) with a little paprika, and chops the corn in the food processor, which makes the dish porotos granados con mazamora.  And in Chilean tradition, she uses starchy choclos humeros (field corn), not sweet corn, and adds a bit of sweet basil at the end.  (Ferias, farmers' markets, often sell bags of shelled beans + squash, corn and basil all cut and ready for the pot).
If you add a chorizo to each bowl, it should look like this.

While porotos granados is a summer dish, prepared when fresh corn is in the market, the winter version uses dry porotos tortola (AKA porotos burros) or other light colored beans, and adds broken spaghetti to cook with the beans during the last 10 minutes or so, to make Porotos con rienda. 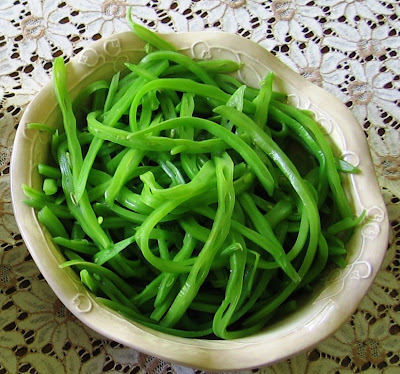 Green beans are also popular in , usually cut French style and served as salads (and on sandwiches-try it!), or in cazuela.
And the pallares (lima beans)?  They are available, but their popularity is mainly in the north, near , and in the Mapuche regions to the south. 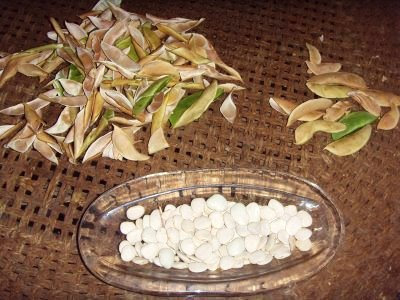 13 The term porotos granados refers to fresh mature beans, removed from the shell, “shell beans” in American English; to the dish of cooked beans discussed above; and to the variety of beans in the photo, cranberry beans in English