Is farmed salmon good for the Chilean environment?

Last week I asked “Is Chilean farmed salmon good for you?” The answer, based on research from Science, The Chilean Journal of Nutrition, the Institute of Medicine of the [USA] National Academies, and others is "maybe."  Here’s what the research tells us:


1. Salmon is really good for you, especially for pregnant women and people at risk for heart attacks.


2. Chilean salmon is contaminated with organochlorides and some Chilean salmon has been found to have other contaminants, resulting from steps to fight disease. These are potentially dangerous for everyone, but especially for children and women who may become pregnant.

“Maybe” is not a very satisfying answer, but with nutritionists strongly promoting farmed Chilean salmon and toxicologists strongly discouraging us from eating very much of it, there is no clear answer.

But other questions remain: “Is farmed salmon good for the Chilean environment?”

Salmon and the environment

Chile’s 10th Region, Los Lagos, includes dozens of lakes along with the Andes, volcanoes, rivers, forests, Chiloé Island and the northern part of the Chilean archipelago. It is among Chile’s most scenic areas, historically one of the poorest, and now home to most to Chile’s salmon farms. Other important economic activities of the region are agriculture, siliviculture, fishing and tourism.
.
Chilean salmon farms threaten this environment, and no one seems to claim otherwise. The major problems, in both lakes where smolts are raised, and in the sea where the salmon grow to marketable size are:  wastes, escapes, diseases and parasites, chemicals, feed/food, and aesthetics. 1, 2
. 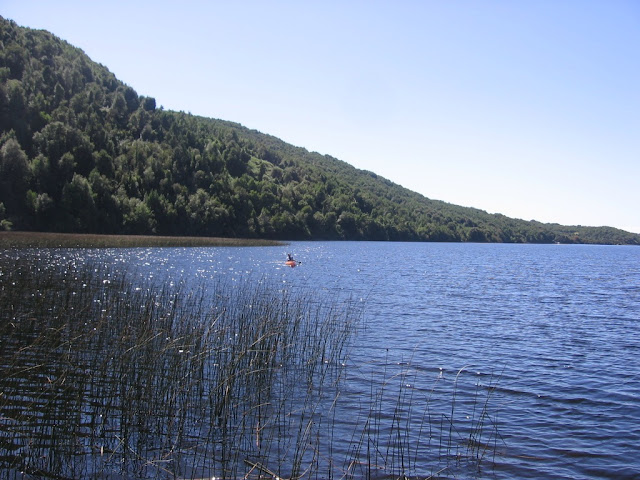 Lake Huillinco, Chiloé Island site of five salmon farms, including one barely visible at the far right of the photo.
.


Wastes: During their 8 to 16 months in net cages in lakes and two years in sea cages salmon waste and food residues flow directly into the surrounding water. In the lakes, where no current dissipates the flow, the areas below the nets become dead zones, the oxygen taken up by the decomposition of feed residues and feces. Overall, salmon farms are a major source of nutrients to the lakes, second only to the rivers that feed them, and are thought to be the source of the lakes increasing algal growth.3 In the sea, wastes are dispersed by currents, but may also result in growth of toxic algae which poison shellfish, as has happened en the Mediterranean and Scotland 4.


Escapes:  In one respect, Chile is an ideal location for salmon farming. With no native population of wild salmon in Chilean waters, some of the potential danger of escaped salmon in other regions—disease transmission, genetic mixing, etc.—does not exist. Yet escaped salmon, estimated to number an incredible 900,000 per year 5, pose a significant threat to native fish in Chilean lakes and are also a potential threat to native marine species.

“All these problems are related to an underlying lack of sanitary controls,” said Dr. Felipe C. Cabello, a professor in the Department of Microbiology and Immunology at New York Medical College in Valhalla that has studied Chile’s fishing industry. “Parasitic infections, viral infections, fungal infections are all disseminated when the fish are stressed and the centers are too close together.” 6

Chemicals:  To combat these threats salmon are treated with antibiotics, at levels claimed to be 75 to 200 times those used in Norway; fungicides, sometimes including the banned chemical malachite green; and poisons to control sea lice. Antibiotic use at these levels incurs the risk that antibiotic resistant strains of bacteria will evolve; malachite green is a carcinogen; and treatments for sea lice may have adverse effects on other crustaceans as well as on farmed mussels and other shellfish. 7

Feed:  Chilean Salmon are fed pellets of fish meal and fish oil, processed mainly from wild caught mackerel (jurel). Approximately three pounds of fish are required to produce the feed to grow one pound of salmon (although industry claims are lower and some environmentalist’s claims are much higher). Critics argue that feeding wild fish to salmon is not sustainable and results in an overall decrease in protein from forage fish to the salmon. Producers argue that the forage fish used in salmon feed are being harvested at sustainable levels and that they are species which are not especially attractive as human food and would otherwise go to waste.

Aesthetics:  Salmon pens themselves are relatively unobtrusive from sea level, though clearly visible from satellite photos, as below.  But local fishermen complain of polluted water and stinking beaches from salmon faeces and dead salmon. 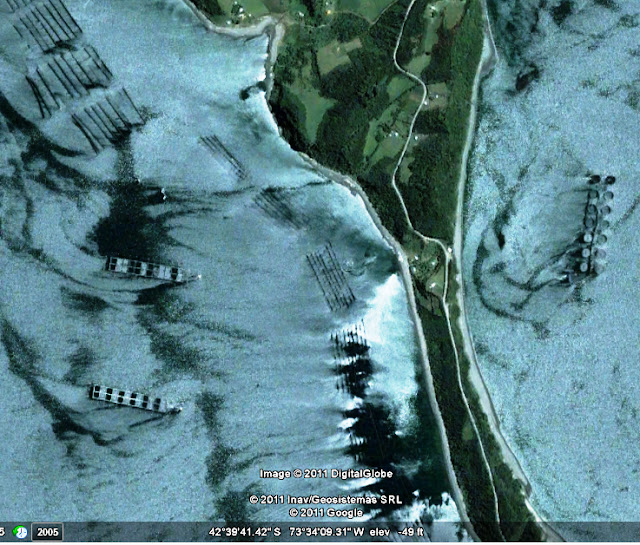 Other issues: Sea lions die from entanglement in the nets and are reportedly shot by salmon farm attendants. 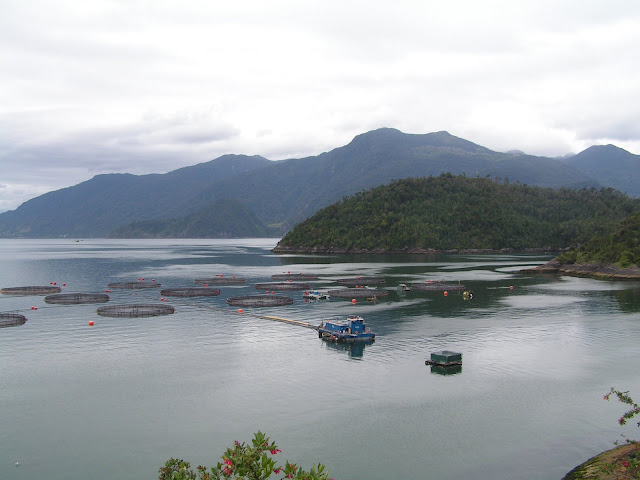 There seems to be no other conclusion: Chilean salmon farms are environmental disasters. They are not good for the Chilean environment. Under optimum conditions they cause problems, and Chile has been lax in regulating this industry. Now, with international publicity and American supermarkets refusing to buy Chilean salmon, new regulations are being proposed; regulations which Chilean environmental group, El Centro Ecoceanos has called “weak, insufficient and accommodating” to the industry. 9


California’s Monterey Bay Marine Aquarium publishes “Seafood watch” which conducts “research on fisheries and fish farming practices and their impact on the marine environment” with recommendations on which sea foods are environmentally sustainable. Farmed salmon is on the avoid list (but see below): 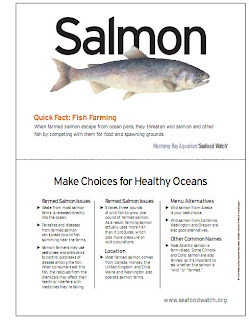 Avoid these for now. These fish come from sources that are overfished, caught or farmed in ways that harm other marine life or the environment. If you do nothing else, steering clear of Avoid items will have a positive impact on the health of the oceans. 10
.
Update Sept. 2013

Farmed Atlantic salmon from Verlasso® is a "Good Alternative". Many potential environmental problems exist with farming salmon in open pens; efforts to minimize these impacts by Verlasso® have reduced the degree of these concerns.

All other farmed salmon has an "avoid" rating.


For part 3, go to Chilean Salmon and Chilean Society