Is it good for you?


I like salmon. I especially like wild-caught Chinook salmon—the richest and reddest there is—grilled over charcoal with corn on the cob, homegrown tomatoes, and a light zinfandel. But now I live in Chile, where salmon are not native, but are farmed. Not quite in the same league as Chinook, but good and inexpensive: $2 to $5/lb. compared to $30/lb. for that wild-caught Chinook.

Wild salmon and sea-run rainbow trout, or steelhead, hatch from eggs in fresh water streams where they spend 2 to 6 years, and then swim down stream to the sea where they spend another 4 years or so before returning to their natal streams to spawn. Unlike Pacific salmon not all Atlantic salmon or steelhead die after spawning, and may return to sea and spawn again later. 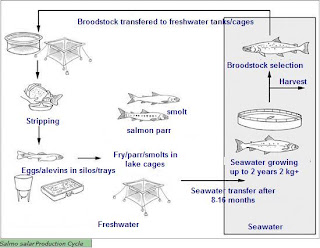 Salmon farms more or less imitate that life cycle. Eggs stripped from adult female fish and mixed with the milt of males are hatched and grown in hatcheries until they can be transported to fresh water lakes. There they remain in net cages for 8 to 16 months until large enough—40 to 120 gm—to be taken to the sea cages where they remain for up to two years until large enough for processing at 2 kg. or more. 2

The end product is similar in taste and nutrition to wild salmon, but not identical. According to the USDA, 100 gm portion of farmed salmon has about 180 calories and about 10.9 grams of fat while a portion of wild salmon has 140 calories, and 6.3 grams of fat. The farmed salmon contains about 1.82 grams of the beneficial omega-3 fatty acids while the wild contains slightly less, 1.55 grams. Both provide about 20 grams of protein. Both are pink to red, but the color of the wild salmon is due to pigments in crustaceans in its diet while the color of farmed salmon comes from pigments added to its feed.

Is farmed salmon good for you?


Yes, absolutely …unless it’s contaminated. The Institute of Medicine of the [US] National Academies tell us that:

Eating seafood is associated with benefits that include reduced risk for heart disease among the population in general and possibly reducing risk for coronary heart disease among at-risk individuals. There may be additional benefits to infants of women who consume seafood during pregnancy such as improved cognitive and other developmental outcomes.3

And Atlantic salmon, wild or farmed, is among the most beneficial seafood, with more omega-3 fatty acids than any other commercially available fish. In 2005 The Chilean Review of Nutrition published “Salmon: A Healthy Banquet” a glowing report by Alfonso Valenzuela B. on the health benefits of salmon:

Salmon is…. a good source of some important omega-3 polyunsaturated fatty acids, particularly of eicosapentaenoic acid (20:5, EPA) and docosahexaenoic acid (22:6, DHA). EPA consumption is associated to the protection of cardiovascular diseases, because of its hipotriglyceridemic, hipocholesterolemic, and anti-inflammatory actions. DHA is related to the development of the nervous and visual system. It has been proposed that the consumption of these fatty acids by the general population may have important health benefits…. Two to three salmon servings provide twice the suggested EPA and DHA requirements. It is necessary to promote a policy intended to increase fish consumption, particularly of salmon, due to the content of omega-3 fatty acids, in addition to other nutritional properties.4

….unless it’s contaminated. And, according to other studies (not mentioned by Mr. Valenzuela), it is.

In January 2004, a year prior to the publication of Mr. Valenzuela’s article, Science published an article entitled “Global Assessment of Organic Contaminants in Farmed Salmon” (click to enlagre "Study Findings, at right)

Having analyzed over 2 metric tons of farmed and wild salmon from around the world for organochlorine contaminants, we show that concentrations of these contaminants are significantly higher in farmed salmon than in wild. European-raised salmon have significantly greater contaminant loads than those raised in North and South America, indicating the need for further investigation into the sources of contamination. Risk analysis indicates that consumption of farmed Atlantic salmon may pose health risks that detract from the beneficial effects of fish consumption.

And although they note that Chilean farmed salmon is lower in contaminants than European farmed salmon, they recommend consumption of no more than one meal per month, and conclude that 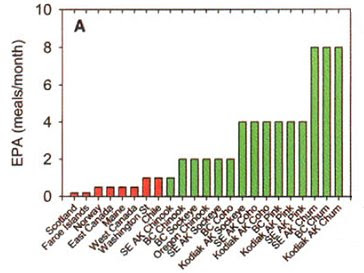 
This contamination comes from salmon food, meal made from small fish, especially mackerel (jurel) in Chile, and ultimately from pesticides and other chemicals that wash into the sea and contaminate the fish. Chilean farmed salmon is less contaminated that European salmon because the south Pacific, where Chilean fish meal comes from, is less contaminated than the north Atlantic, source of European fish meal. Once in the body these substances accumulate in our fat, and pregnant women pass the contamination on to their babies, where high levels can harm the developing nervous system. 6

When the Science article was published (or perhaps “hit the fan” is more descriptive), there was an immediate uproar—and not just from salmon farmers. The nutritionist community was also appalled, arguing that their conclusions failed to take into account the nutritional benefits of salmon.


The result was, of course, another study, this one by the (US) National Academies, “Seafood Choices: Balancing Benefits and Risks” which concluded (surprise!) that there were both benefits and risks to consuming seafood, and without specifically mentioning salmon, that people should consider the sources—species and geographical—of their seafood as well as their own age, sex and reproductive status when deciding what to eat.


More specifically, they concluded that everyone can benefit from consuming seafood, especially seafood with higher concentrations of EPA and DHA [like salmon] “which may reduce their risk for cardiovascular disease.” A reasonable intake would be two 3-once servings a week, but up to 12 ounces a week can be consumed safely, with some exceptions: women of child bearing age and children should eat no more than 6 ounces of white tuna (albacore) per week; and should avoid large predatory fish like shark, swordfish, tilefish, or king mackerel. People who eat more than “two servings a week should “choose a variety of types of seafood to reduce the risk for exposure to contaminants from a single source.” 7


And they gave us a flow chart to help us decide 8
(click to enlarge). 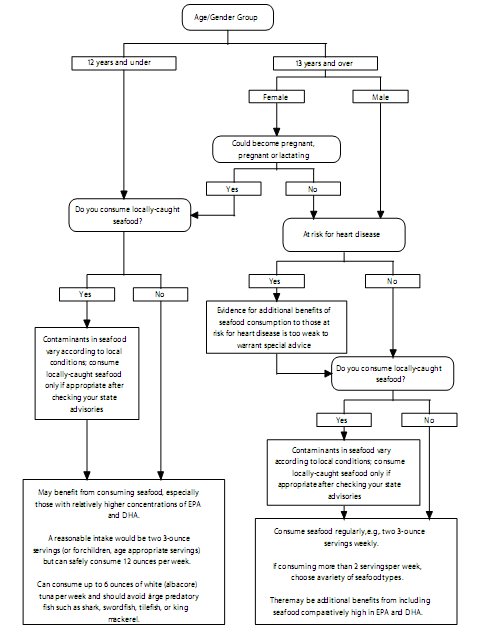 End of discussion? No, not quite.

Two other issues must be considered in our calculation: disease in Chilean farmed salmon and potential contamination from steps to prevent it.
.
Infectious Salmon Anemia (ISA) is a viral disease that has been found on more than 100 Chilean salmon farms. Although it poses no risk to people, it can kill up to 50% of infected salmon. To prevent it and other salmon diseases, critics claim that Chile uses up to 300 times more antibiotics than in Norway and “traces of crystal violet, an anti-fungal chemical believed to have potentially carcinogenic properties” were found in Chilean salmon in Germany. 9
.
So, where are we? To the question “Is it good for you?” we have the following:
.
1. Salmon is good for you, especially for pregnant women and people at risk for heart attacks.

2. Chilean salmon is contaminated with organiclorides and some Chilean salmon has been found to have other contaminants, resulting from steps to fight ISA. These are potentially dangerous for everyone, but especially for children and women who may become pregnant.


The controversy over salmon consumption continues, but the tilt seems to be in the direction of the benefits of Omega-3 outweighing the risks from organiclorides.

...for farmed salmon, the cardiovascular benefits are greater than the cancer risks by a factor of at least 300:1. With the exception of some locally caught sport fish from contaminated inland waters, the levels of PCBs and dioxins in fish should not influence decisions about fish intake.  [Harvard School of Public Health (2006, October 18). Benefits Of Eating Fish Greatly Outweigh The Risks, New Study Says. ScienceDaily.  http://www.sciencedaily.com­/releases/2006/10/061018094758.htm ]

The Washington Post (Sept 24, 2013) published an update on the status of farmed salmon, in terms of all the parameters discussed here:  "More recent research weighing the contaminant risk against health benefits from omega-3s concluded that every serving of salmon, wild or farmed, is a net positive," and while "there is work to be done before [the] goal [of making farmed salmon sustainable] is met"  there has been great improvement.  Monterrey Bay Aquarium Seafood watch now lists farmed Chilean salmon produced by Verlasso as a "good alternative."

See: Why farmed salmon is becoming a viable alternative to wild-caught