This week my wife came in with a dozen or so tunas, cactus pears, bought from a street vender—1000 pesos ($1.70) a bag—on the way home from work. 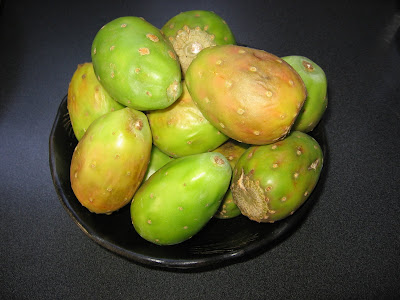 Coming from a country in which tunas are little more than a curiosity, I was surprised to discover their popularity in Chile, and as I did a little reading, throughout the Mediterranean as well. 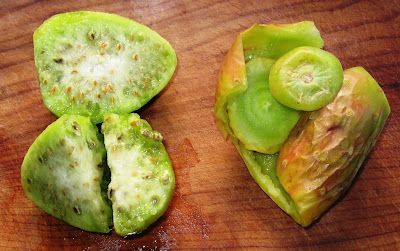 And deservedly so. Once the thick and potentially spiny skin is removed, the fruit is refreshing, juicy, sweet and a little acid, with a taste slightly reminiscent of a honeydew melon. There are a lot of small seeds, but practiced tuna eaters swallow them along with the pulp.

Tunas (from the Taíno of Haiti) are the fruits of many species of nopal (from the Aztec language Nahualt) or Opuntia. They are native to the Americas from the northern plains, where Lewis and Clark found the spiny plants a great hindrance, to Patagonia, where Charles Darwin encountered Opuntia darwinii. Many species produce succulent fruits important to American Indian diets, as described by Alvar Nuñez Cabeza De Vaca. He landed in Florida in 1528, was attacked by Indians, shipwrecked, made a slave, and eventually, over the course of eight years, walked from the Texas coast back to Spanish territory in NW Mexico. Speaking of Texas Indians, he wrote:

They are a very merry people, and even when famished do not cease to dance and celebrate their feasts and ceremonials. Their best times are when "tunas" (prickly pears) are ripe, because then they have plenty to eat and spend the time in dancing and eating day and night. As long as these tunas last they squeeze and open them and set them to dry. When dried they are put in baskets like figs and kept to be eaten on the way. The peelings they grind and pulverize.

During all the time we ate tunas we felt thirsty. To allay our thirst we drank the juice of the fruit, pouring it first into a pit which we dug in the soil, and when that was full we drank to satisfaction. The Indians do it in that way, out of lack of vessels. The juice is sweet and has the color of must. There are many kinds of tunas, and some very good ones, although to me all tasted well alike, hunger never leaving me time to select, or stop to think which ones were better. [i]

Further west, in Arizona and Northern Sonora, the Tohono O'odham (Papago) and Pima made extensive use of opuntia fruit as well as:


Saguaro (Cereus giganteus, Engelm.) [the] fruit [of which] was highly prized, particularly for making an intoxicating beverage, especially as a prelude to a war expedition. Its harvest was so important that the Pima started their new year count with it. The fruit was eaten fresh and was also dried in balls some 15 cm. in diameter. The juice was extracted from both fresh and dried fruit by boiling all day. The residue is ground to a paste on the metate and eaten without further preparation. The juice makes a thick syrup which may be stored in jars sealed with clay. When diluted and allowed to ferment, it makes a sweetish intoxicating drink.[ii] 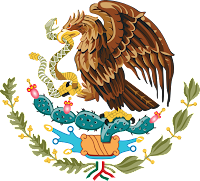 But the real center was, and is, Mexico. Perhaps as early as 12,000 years ago and clearly 9,000 BP (before present) there is evidence (remains were found in human coprolites, AKA dry turds) that tunas were being eaten and domestication may have begun.[iii] Their importance is indicated by their place in the Aztec origin myth, represented on the Mexican coat of arms. The gods indicated the future site of Tenochtitlan, the Aztec capital and today’s Mexico City, by showing them an eagle perched on a prickly pear.

From Mexico, the domesticated Opuntia ficus-indica spread throughout Mesoamerica and the Caribbean, where the Spanish first encountered it, and perhaps to South America as well; though the latter is open to question. 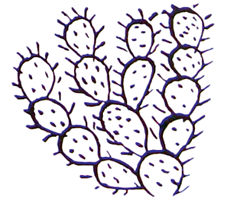 The nopal pictured on a pre-Columbian Nasca vase from Peru may or may not have been the domesticated variety from Mexico.


Shortly after their discovery nopales were introduced to Spain, probably by Columbus’ second voyage in 1594, where they were called Higos de la India, or India figs, and from there they were widely dispersed throughout the Mediterranean basin and eventually into arid regions throughout the world. Their early spread is attributed to transportation by sailors, who found the flesh of the noplaitos or pads a specific against scurvy, and later as forage for cattle in dry regions of Australia and South Africa. 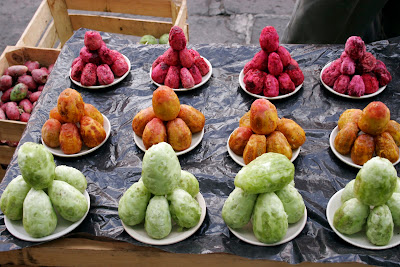 Tunas in a Market in Mexico

Today they are commercially cultivated in not only in Mexico, where there are an estimated 70,000 hectares, but also in Algeria, Argentina, Bolivia, Chile, Israel, Italy, Morocco, South Africa, Tunisia, and the United States. [iv] 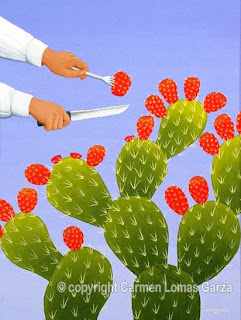 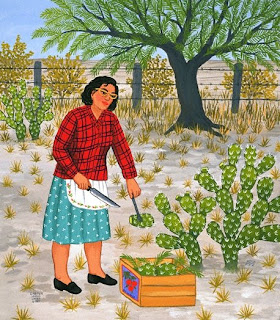 Harvesting tunas and nopales in the work of Chicana
artist Carmen Lomas Garza. 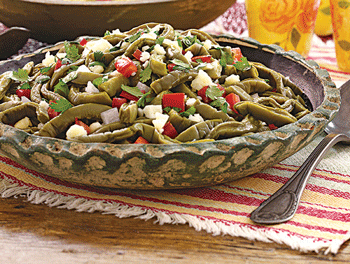 Here in Chile, where an estimated 1,200 hectares produce 9,000 tons a year, the fruit is prized, but the flesh of the pads, the nopalitos, seems not to be eaten—or at least I have found no evidence to the contrary. That’s unfortunate, because they are an attractive vegetable, especially as prepared in Mexican salads.