The oldest menu in the Americas, dating to 14,000 years ago, comes from Monte Verde, a southern Chilean archaeological site, famous among anthropologists, although little known among the public. Near Puerto Mott, Monte Verde (red area on map), provides the oldest widely accepted evidence[i] of human settlement in the Americas, including the remains of plants and a animas used as food.


click map to enlarge
The site, discovered in 1975 and excavated beginning in 1977, is not only the oldest in the Americas, but it is so old and so far south that it virtually eliminates the long held theory that the first Americans were Clovis big game hunters. The Clovis people, or their immediate ancestors, are thought to have crossed from Siberia when Pleistocene sea levels were low, following the mammoths and bison that were their prey. Then, as the glaciers retreated after 12,000 years ago, they moved south through an ice-free corridor, leaving evidence of their passing at mammoth kill sites across North America, such as their name-sake site near Clovis, New Mexico. But Monte Verde, earlier than any Clovis site and 5000 miles south, makes it certain that the first Americans came earlier, perhaps much earlier; though how and when remain unknown.


Not only is Monte Verde remarkable in its location and age, opening a new chapter in our understanding of American prehistory, it is also remarkable for the organic materials—including foods—found on the site, preserved because the site was rapidly covered by water-born silt and then by a layer of peat, producing an oxygen-poor environment that largely prevented decomposition.

Reconstruction of the community of Monte Verde

Contrasting with the image of the Clovis hunters, thought to have focused largely on mammoths, the evidence at Monte Verde suggests that the 20 to 30 inhabitants were harvesting a broad spectrum of wild plant foods from many local micro-environments, much like more recent hunters and gatherers. These included the Pacific beaches to the west and the large bay to the east, which provided 9 species of seaweed; freshwater marshes, which provided 15 species of aquatic plants; and the inland forests and wetlands which provided 46 other plant species, including wild potatoes, a “wide variety of edible seeds, stalks, leaves, fruits, nuts, berries and roots,” plus freshwater mollusks and meat from an extinct species of llamas and the mastodon-like gomphothere (Cuvieronicus sensu). 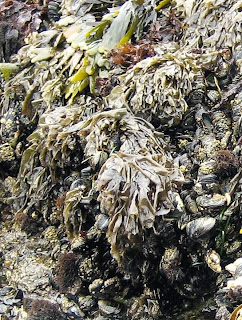 Among the seaweeds is luche (Porphyra spp. left), known as nori to the Japanese who use it to wrap sushi, and as “laver” to the Irish. Today in Chile is it steamed, or dried in a slow oven until crisp, then crumbled over rice, pasta, or salads, or used as an ingredient in empanadas, or stews.[iii]

Another seaweed, cochayuyo (Durvillaea antarctica, “bull kelp”) found at Monte Verde is even more widely eaten in Chile, and is regularly available at fish markets. It is prepared by soaking overnight and then boiling in water with a little vinegar. It is then scraped with a knife, and cut into pieces for adding to stews as a complement to or replacement for meat.[iv] 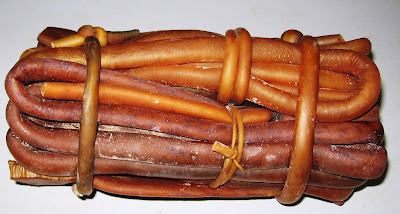 Wild potatoes (Solanum maglia) were also among the plant remains found at Monte Verde—making them the earliest potatoes, wild or cultivated, on record. Modern plants of this species, which produces small tubers seldom more than1.5 inches in diameter, prefer “low, humid, shaded areas near the edges of bogs and swamps” in south central Chile. The Mapuche, indigenous people of the area, know this potato as malla, and wrere reported to gather and eat them into the 20th century.[v]

Compared to the rich plant resources, relatively few animal remains were found at Monte Verde: freshwater mollusk shells, one scapula from a palaeolama, and meat, hide fragments and bones (mainly ribs) from seven elephant like “gomphothere” (Cuvieronicus sensu), which stood 8 to 9 feet tall. 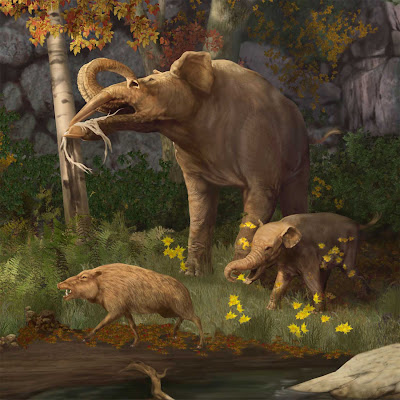 
Archaeologist Tom Dillehay suggests that these gomphothere bones are from animals killed or scavenged at a distance, where most of the heavy bones would have been left. No weapons that seem suitable for hunting elephants have been found on the site; only a 5 foot pointed wooden lance, bolo stones (tied to cords and thrown at smaller game), round stones probably for throwing in slings, and a bone fragment that may have been a lance blade. But finding the remains of seven individual gomphotheres suggests that they were not an especially rare aspect of diet, unlikely if they resulted only from scavenging.