On my first day in Chile, I crossed the river from my hostel to Bellavista, Santiago’s “Bohemian” neighborhood, sat down at an out door cafe and ordered a beer in my usually serviceable gringo Spanish. 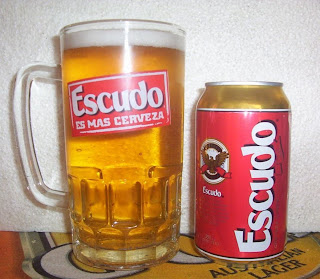 Waiter: “A schop?”
Me:  “Ah… a beer, I’ll have a beer.”
Waiter, with irritation, while making beer stein gestures:  “A schop, you want a schop?”
Me: “Okay, okay, I’ll have a schop.”
Waiter: “Escudo?”
Me: “Excuse me?”
Not a great beginning for gringo Spanish in Chile.
Photo: El Birrerio
As it turns out schop, from the German schoppen, is Chilean for a draft beer and Escudo (shield) is one of the most popular Chilean beers—a descendant of beer made by German immigrant Carl (Carlos) Anwandter who established his brewery in Valdivia, in south central Chile, in 1851.
Carlos Anwandter was among the earliest of some 11,000 Germans who immigrated to Chile between 1846 and 1914, about half of whom settled in the southern frontier zone.  There they established German-speaking communities that included many skilled craftsmen and professionals: beer-brewers, tanners, furniture makers, pharmacists, professors and scientific investigators.[1]  Today 500,000 to 600,000 descendants claim German ancestry and German-Chileans are prominent in all aspects of Chilean life:  politics, business, academia, art, and of course, brewing and food service.
German restaurants, serving a wide variety of German (and German-Chilean) dishes are common in Santiago and surrounding areas.  Some of the best known are the chain Bavaria, Tante Marlene, and Restaurant Der Münchner, below. 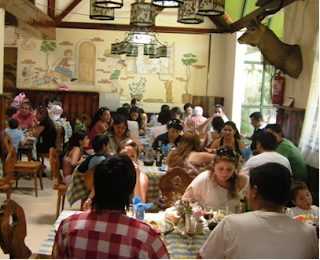 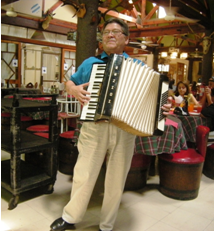 But perhaps the most popular are the German-Chilean cafes and schoperías (beer joints) where you can have a beer and anything from a sandwich to a full meal.  Among the best known are the Santiago classics  Fuente Alemana, and the Elkika Ilmenau, or the chain Tip y Top. All serve everything mentioned here along with German sausage plates, hamburgers, hot dogs, and Chilean sandwiches like churrascos (steak), “Barros Lucos,” (hot beef and cheese), and lomitos (below). 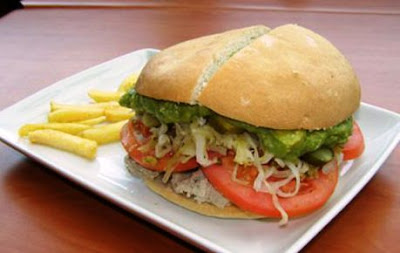 The lomito completo (roast pork sandwich with sauerkraut, tomatoes, avocado and mayonnaise) at Elkika.
German influences in Chilean cuisine
Naturally, Germans immigrants influenced regular Chilean cuisine, especially in the south, but also nationally. Today kuchenes, German influenced cakes, and a sprinkling of other German dishes are widely integrated into Chilean diet.
Chilean kuchen
Kuchen, “cake” in German, is among the most mobile of German foods; it seems to have migrated into the national cuisines everywhere Germans settled.  Kuchen is the official state dessert of North Dakota; it’s popular in Brazil under the name cuca, where it usually refers to a banana cake  with a streusel topping; and in Argentina as torta alemana or simply as kuchen.
While Kuchen can refer to a wide variety of cakes in German, in Chile kuchen is a pastry with a crust of firm cake or crisp tart dough topped with fruit and sometimes streusel (a crumb topping of flour, sugar and butter). The classic Chilean cookbook, La Gran Cocina Chilena includes 17 Kuchen recipes.[2]  No onces, a light Chilean meal like tea taken in the early evening, is complete without a kuchen. 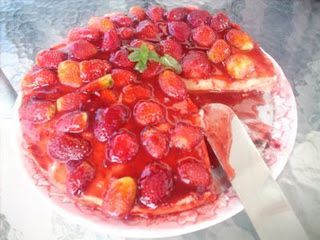 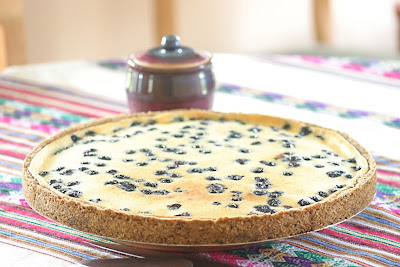 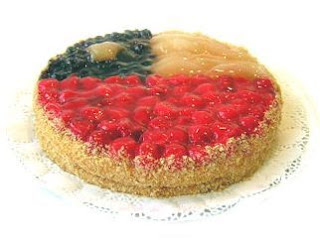 And for the most Chilean of all, there is the Chilean Flag kuchen, from Pasteleria Mozart in Santiago.
Pernil – pork hock
While kuchen is the most widely appreciated German-Chilean dish, pernil certainly has its advocates.  Pernil means “leg” or “shoulder” (as in pork “picnic” shoulder) in traditional Spanish, but in Chile a pernil is a generous pork hock, usually served boiled with mashed potatoes or sauerkraut (chocrut).  Peel away the thick layer of skin and fat and the meat below is succulent and meltingly tender. 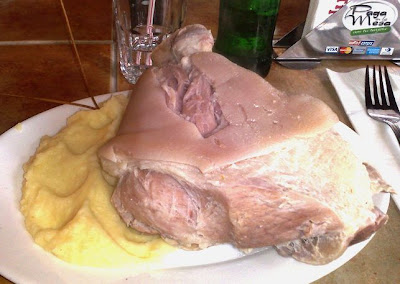 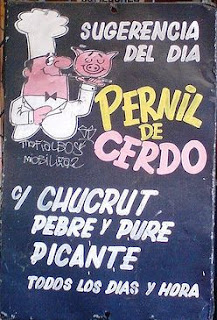 It is found in German-Chilean restaurants, but also where no other obviously German dishes appear on the menu.  In this restaurant sign from Orsono, it is the “Suggestion of the Day”, served with sauerkraut, pebre (Chilean salsa) and Chilean spicy mashed potatoes

Photo logosorno's photostream
Chocrut – sauerkraut
Where there’s pernilI, there must be chocrut.  The earliest ChileanSauerkraut recipes I’ve found come from La Negrita Doddi, the French influenced 1911cookbook. They are Ganso (goose) a la choucrute and Choucrute al la alemana (German stile). Both use the French spelling “choucrute” and neither actually uses sauerkraut (fermented cabbage), but cabbage blanched in boiling water and drained, then simmered with onion, sausage and bacon – and goose in the first recipe. A similar recipe occurs in the 1882 Nuevo manual de cocina where it is called simply “partridges with cabbage” (perdices con repollo, p.72).  All (or none) may reflect the influence of German immigrants who began arriving in 1846.  Today in Chile sauerkraut is most commonly found on a completo, a Chilean hotdog with tomatoes, sauerkraut, avocado and abundant mayonnaise; or on other sandwiches. 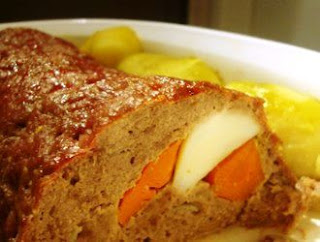 Asado Aleman (“German roast” AKA meatloaf)
Chilean asado aleman, like pernil, is found on the menus of Chilean restaurants with no other “German” dishes. It often includes hard boiled eggs and sometimes cooked carrots. The meat is usually ground beef combined with milk-soaked bread and eggs, sautéed onions and perhaps garlic, paprika or oregano.

Photo and recipe in Spanish: Corazón de Alcachofa
Similar recipes are found all over Latin America under the names “albondigon” (big meatball), or molde de carne (mold of meat), although characteristically the Chilean version tends to be among the simplest and least highly seasoned.
Escalopa Kaiser – beef cordon bleu
Milinesas or escalopas, thin cutlets of meat, coated in bread crumbs and fried, are popular throughout Latin America as well as in Europe.  They seem to have been in Chile before there was much German influence, appearing in the 1882 Chilean cookbook, Nuevo manual de cocina as biftek rebozado (breaded steak).  But today’s version, the Escalopa Kaiser, certainly owes its origin (or at least its name) to German immigration.  It is two slices of beef with sliced ham and cheese sandwiched between, the whole breaded and fried.  They are popular and served widely, as the one below (which appears to be chicken) at the Oktober Fest 2008, Malloco, Chile. 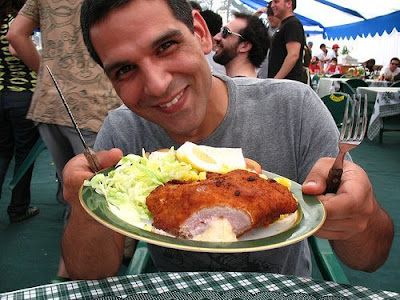 “Daniel, happy with his Escalopa Kaiser”

Crudos – steak tartare (literally “raws”)
While Chile’s most famous crudos are served at the Café Haussmann in Valdivia, they are also popular in Santiago and other cities, especially as bar food.  Everyone in Valdivia seems to have a version of the “authentic” Café Haussmann recipe, each one a little different. 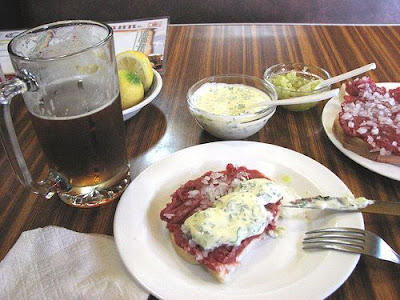 Here’s another version, from Ana María Springer Hitschfeld of Frutillar, a German-Chilean town in the south.
Crudos, Cabañas El Tirol

Other German-Chilean foods
Other classic German foods, purple cabbage, smoked pork chops, rye bread, German style sausages (bratwurst, weisswurst, etc.) are occasionally (some regularly) available in Chilean supermarkets (Jumbo for example), but are not really integrated into Chilean cuisine.   And of course hot dogs and hamburgers are ubiquitous; although they seem to be only indirectly German – via the USA.
[1] German Genealogy: Chile. On line at http://www.genealogy.net/reg/WELT/chile.html
[2] Alfaro, Mónica T. 2000. La Gran Cocina Chilena, 8th Edition.  Santiago:  Ediciones Occidente S.A. p. 416
Posted by Jim at 10:50 AM