Among those UFOs (unidentified food objects) on Chilean supermarket shelves, one that aroused my curiosity early was miel de palma, literally “palm honey,” in its odd little plastic bottle. Since American style pancakes with (imitation) maple syrup had been a family hit, I had been buying expensive mediocre imported pancake syrup when I found it… which wasn’t all that often. 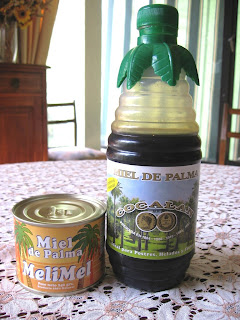 So I bought some. It’s really good; golden brown, thinner than honey, and with a flavor reminiscent of molasses, but milder. And that was the end of imitation maple syrup for this household.But of course, I had to find out more about it.
I quickly discovered that it comes from the Chilean wine palm or coquito palm (Jubaea chilensis, palma Chilena in Spanish), a native Chilean species and the among largest of the world’s palms with trunks reaching 5 feet in diameter and heights of up to 100 feet.[1] 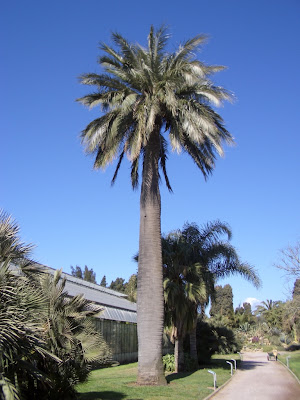 The palm is native to central , from the coast to elevations of 1,500 meters.  In The Chilean Palm, architect and palm aficionado, Pastor Correa Prats writes:


At the arrival of the Spanish, in the 16th century, [the Chilean palm] ….was widely dispersed throughout the entire central zone, forming great forests, tens of millions of palms between Coquimbo and Colchagua. In the 17th century Father Alfonso Ovalle described it in his Historical Account of the Kingdom of Chile (Histórica Relación del Reino de Chile): “these palms usually grow in mountains and canyons so steep, that seeing them for afar they seem to have been placed by hand.  They are very thick and tall.  The entire trunk is bare up to the fronds; such is its nature, that as it dresses itself with new fronds it is divesting itself of the old ones.”[2] (All translations mine unless otherwise noted.)
To the Mapuche, native people of central , the palm (lilla or llillaI) was an important resource. Its fronds were used for constructing shelters and its fruit and nut, cau cau, (Sp. coquito, “little coconut”) was eaten. The tree itself was felled in the spring for the tender new fronds developing in the crown, which were eaten boiled, and “upon cutting, there is an abundant sugary liquid, which when boiled, becomes a delicious honey, similar to that of sugar cane; but as this operation inevitably causes the death of the tree, it is only done when the tree no longer has greater utility as a producer of cocos”[3]  And when “the palm sap was left to ferment, it made “a strong intoxicating drink” called guarango or “water of life,” hence the English name “wine palm.”[4]
In the 1820s English visitor Maria Graham described the tree:

The palm differs considerably from any I have seen in any part of the world.  The height of those I have seen when full-grown is from fifty to sixty feet; at about two-thirds of that height the stems narrow considerably.  The bark is composed of circular rings, knotty and brown; they are always upright, and exceed in circumference all the palms I know, except the dragon tree: the spathe containing the flower is so large, that the peasants use it to hold various domestic articles; and it is shaped so exactly like the canoes of the coast that I think it must have served as the model for building them.  …[It produces] a nut of the shape of a hazel, but much larger; the kernel is like a cocoa-nut, and like it, when young contains milk. This tree, when it is old, that is when the people calculate that it may have seen a hundred and fifty years pass by, is cut down; and, by the application of fire, a thick rich juice distills from it, called here miel, or honey. The taste is between that of honey and the finest molasses. The quantity yielded by each tree sells for 200 [ca. $3000, 2005] dollars. [5] 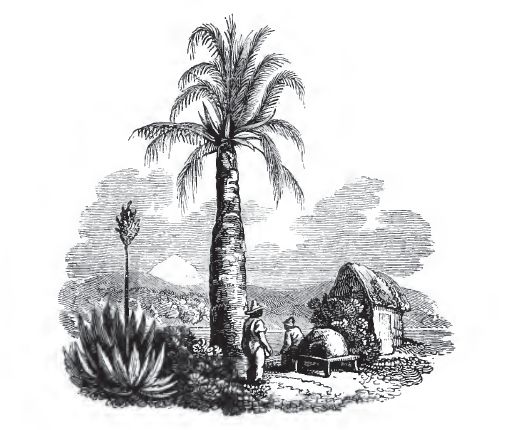 Maria Graham’s sketch of the Chilean Palm
Unfortunately, the Spanish enthusiasm for miel de led to overexploitation, reducing the millions of trees to three major stands, with a population of about 100,000.  These stands are now protected, but in one the company Cocalán is allowed to harvest limited numbers of old trees for syrup production, followed by reforestation. Reforestation is also the goal of the Foundation for the Recuperation and Promotion of the Chilean Palm.
The basic process involves felling the palm (by cutting according to some sources, uprooting according to others) so that it falls with the crown down hill, then removing the fronds and cutting ”a razor thin slice at the apex.”  The sap drips from the cut into collectors.  To maintain sap flow, a new cut is made daily, for six to eight months or more, during which 400 to 600 liters of sap are collected. [6] The sap is then boiled down and mixed with coconut juice (jugo de coco) and corn or cane sugar according to a recipe that is about 100 years old.
An explanation of the current harvesting and replanting process is provided by José Luis Angulo in his The Chilean Palm: Interesting Renewable Natural Resource. 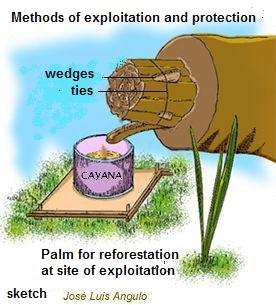 The production of palm syrup is long and laborious, uniting the work of nature with that of many Chileans and the passage of time, essential for the aging that produces the flavor and color known to many generations of Chileans.  The extraction of the palm sap, basis for the production of palm syrup, is a traditional activity that has been maintained intact for more than 200 years.  For this reason, within its range, the Chilean palm has occupied and occupies a very significant role in our rural culture.

The work begins with a team of forestry engineers who develop a cautious management plan, a plan that is submitted to the National Forestry Corporation (CONAF) of the Agricultural and Livestock Service (SAG).  Once the management plan has been approved, trails and roads are opened, an activity center is set up, and the marking of syrup palms begins, under the supervision of officers of CONAF.  Shortly thereafter (August) begins the uprooting [cutting?] of the marked palms.   As each palm is overturned all its fronds are removed and the area is left open for reforestation.

The extraction itself begins in November and ends in April, allowing the hibernation [?] of the harvested palm and leaving space for the seeding and planting of new palms.  The following November the extraction of the sap begins again, and is completed between February and March.

The collected palm sap is placed in barrels to be taken to the storehouse where it will rest for several years, until it achieves the aging necessary to turn it into the raw material for the production of Chilean palm syrup.

Based on information now available [1985], in the last 20 years in the Hacianda Las Palmas de Cocalán, 15 new palms exist for each one harvested, a number which has increased in the last five years to 36 new palms for each palm harvested, considering only the reforestation undertaken according to the management plan and not including natural regeneration.[7] The palm fruit (right) is also eatable, although it is unlikely to be found far from the tree, but the nuts, coquitos (called coco palma below),  are widely available in tostadurias and even in supermarkets. 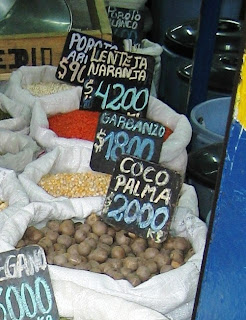 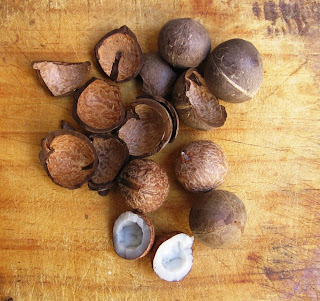 They are like miniature coconuts. They have a hard outer shell and the meat inside tastes almost exactly like that of its larger cousin.  It is widely used in candy and cookies, and can be eaten out of hand, like other nuts. Coquitos are even by available by mail order in the .


But for those outside of , it is the palm itself, rather than its products that you are most likely to encounter.  It is a handsome tree, and since it grows at elevations up to almost 5,000 feet in the , it can withstand colder climates than most palms.  The photo below is at in , , but they are grown as far north as the US Pacific North west and . (See Urbatorium by Chilean blogger Criss Salazar for an extensive discussion of the Chilean Palm with lots of photographs of palms in parks and gardens.) 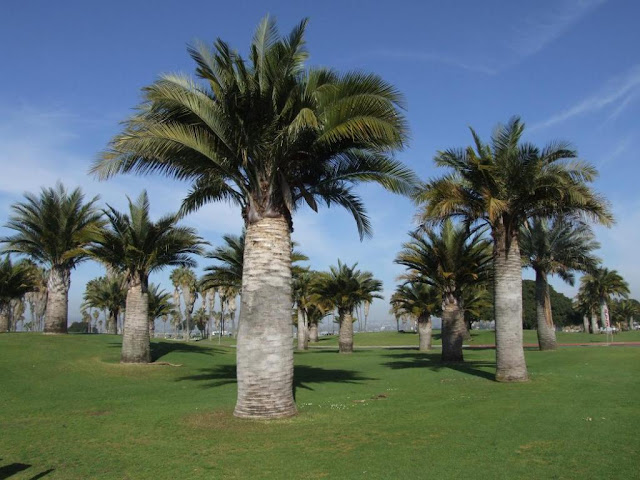