On my first trip to , in 2005, I kept seeing stands selling “mote con huesillos.”  My Spanish-English dictionary was no help, so I tried it and found it to be a stewed dried peach served in a glass with lots of light syrup and a few tablespoons of soft cooked wheat—a bit odd, but tasty and refreshing; thought I couldn’t quite understand its popularity.

But popular it is, and according to Chilean folklorist Oreste Plath, “In summer mote con huesillos is the refreshing drink and dessert with Chilenedad:  for good reason they say “More Chilean that mote con huesillo.”[1] 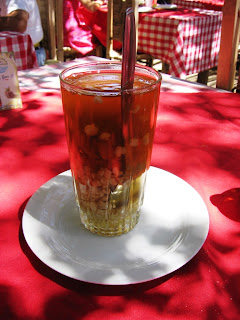 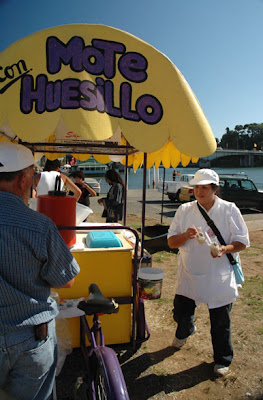 “What is mote?” asks the European.  Nothing more or less than wheat boiled with lye, which by its strength and the heat of the fire causes the grain to loose its husk, and then washed several times in water to rid it of the lie taste, although it is never completely removed. (Recaredo Tornero, Chile ilustrado 1872)[2]

The word mote is from the Quechan mut’i meaning cooked grain[3] —usually maize (“corn” in American English), although in it refers to wheat, cooked, as Tornero explains, in an alkaline solution of lye or wood ashes.  Corn mote is motemei (mote de maíz) in .

This Amerindian alkiline cooking process, called “nixtamalization” after nixtamal, the Mexican equivalent of mote, seems to have originated in sometime around, 1200-1500 BC.  It softens dry maize kernels and removes the bran (or pericarp), making grinding easier and tortillas less fibrous. But more important, it makes maize more nutritious.  A classic article published in Science in 1974 explained that maize protein is unbalanced in its amino acid composition and is low in available niacin, vitamin B3.  Cooking the kernels in alkaline water improves this balance and makes the niacin more available.   “…without alkali processing of corn, there would be a considerable degree of malnutrition in societies where corn is the major part of the diet.” [4] And, in fact, societies in African and , as well as in the American South, that depended on corn as their staple food, but did not use alkali processing, suffered form pellagra—a disease caused by niacin deficiency.  Pellagra is rare to non-existent in , where lime processing is near universal, and there is a strong correlation between the importance of maize in the diet of American Indian cultures and their use of nixtamalization.  The more maize in the diet, the more likely that it is made into nixtamal and visa versa.

From , nixtamalization spread north and south throughout the maize growing areas of aboriginal North and Central America—but, as far as we know, no further south than .[5]  Although maize was grown throughout South America, it was not the staple it was in ; potatoes and quinoa were important in the Andes and manioc was a staple in . 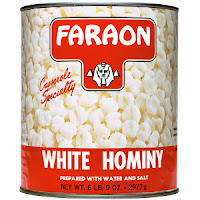 In the south-eastern the finished product of corn cooked in lye water is “hominy,” probably from the Virginia Algonquian uskatahomen.   When dried and coarsely ground, it becomes the southern favorite, hominy grits.  Unfortunately for southerners, hominy and grits were not the staples: unprocessed corn meal was, and “in the early 1900s, pellagra reached epidemic proportions in the American South. There were 1,306 reported pellagra deaths in during the first ten months of 1915; 100,000 Southerners were affected in 1916.”[6]

In and nixtamal (from the Aztec language, Nahuatl), is ground and made into tortillas or tamales, the staple Mesoamerican foods for thousands of years.  Years ago, I described the process among Isthmus Nahuat  Indians in Vera Cruz, :

The woman of the household knows approximately how many ­manos­ - units of five ears each - of maize her family consumes each day and shells enough maize for two or three days.  While the maize is being shelled, a bucket full of water is brought to a boil over the fire and a handful of lime (nesti) is added.  When the water comes to rolling boil the maize is poured in and cooked for about l0 minutes, then is taken from the fire and allowed to soak until needed.  After cooking, the maize kernels, now called ­nixtamal, are taken to the near by stream for washing.  There the maize is rubbed between the hands until the tough outer skins loosen and come off. The maize is rinsed repeatedly until the skins all are washed away and the rinse water is clear, then it is returned to the house for grinding.[7]

A remarkably similar process is followed by Sra. Luisa Quidel, a Mapuche woman who grows wheat from which she makes mote de trigo (wheat mote) for sale in the streets of , a Chilean city in the heart of Mapuche country.  Eugenia Aguilera Vega describes the process:

After the wheat is harvested you must obtain ashes for processing the wheat from a local bakery.  The ashes need to be cleaned and passed through a sieve to make good wheat mote.  The mote must be cooked at a suitable temperature for the best results, so it is done over a wood fire.  It is a slow process, but gas is too expensive.  Next the water is drained off, and the mote, husks now loosened by the ashes, is peeled.  It is scrubbed by hand and this is also a sacrifice; it is tiring work and there is no one to help her. The process is finished when the mote is well washed and allowed to rest until she leaves to sell it early the next morning.[8] 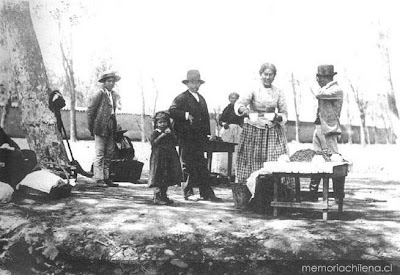 But how did the Mesoamerican process of nixtamalization come to , and how did it come to be applied to wheat?

Although I fond no evidence to explain its arrival, the Spanish probably brought nixtamalization to .  It was almost universal in , and a lively trade existed between and during the century after the conquest.[9]  Nixtamalization is also part of the colonial cuisines, but not the indigenous cuisines, of , , and .[10]

Mapuche servants tended the fires and kitchens in colonial , and the process evidently diffused into Mapuche culture—where it was called kako--not only for maize, but for wheat[11] and legumes.[12] 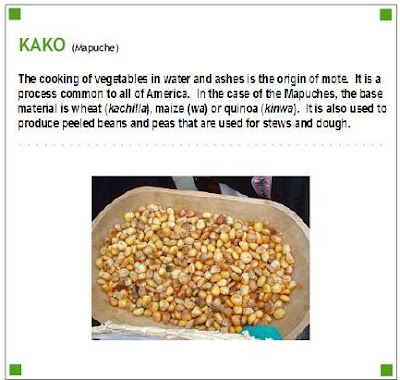 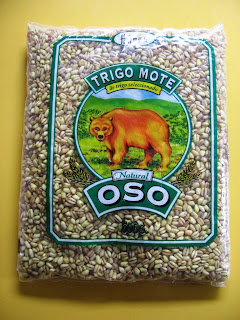 Wheat mote became a regular part of Chilean Creole cuisine for colonists as well as for the Mapuche.  It could be eaten fresh, after processing, or could be dried for later use.  Dried mote is prepared by boiling in abundant water for a half hour of so.

Traditionally it was eaten like rice or mixed with a little of its cooking water, or in pottages.  La Gran Cocina Chilena, the classic Chilean cookbook, offers recipes for mote with: peas, cream, milk, potatoes, and country style (with winter squash and sugar) as well as mote con huesillos.  Most are creamy risotto-like dishes:  sturdy, filling and a bit bland.

But contemporary Chilean chefs are beginning to use mote in other ways: 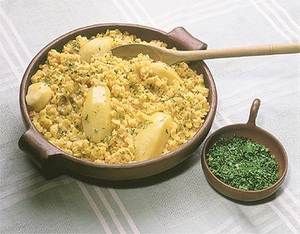 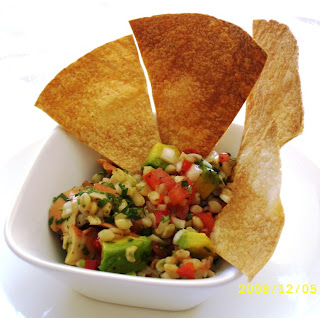 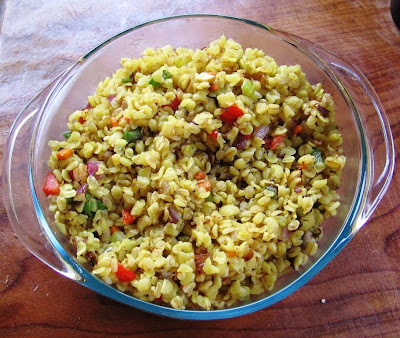 But back to mote con huesillos:

Given its popularity, I assumed that mote con huesillos was one of those dishes, like North American dried apple pie, that satisfied the sweet tooth of rural households in winter when cupboards were bare of fresh food.  Both are products of subsistence farming, storable for long periods, and likely to be available to people of very modest means.  But I was wrong.

The two products seem to have come together in urban of the late 19th Century.  By the 1870s, Recaredo S.Tornero’s Chile Ilustrado shows that mote had begun to be associated with huesillos:

The cry of the motero [mote vendor] announces the coming of summer, the epoch when his sales begin.  What does the motero do during the winter?  No one knows; but it is in the hot season that one hears him in the streets calling “Huesillos”  and ”Fresh mote,” for no one would sell mote alone.  … The measure the motero uses is a large china cup at the reasonable price of one cuartillo (3 cents), including the same cup full of water which he always has in a clay pitcher.

And what about the huesillos?  They are just cooked dried peaches, to which they usually add toasted flour.[13]

So when did the combination begin?  Probably a little later.  But by the beginning of the 20th century it had become popular in [15] and today “nothing is more Chilean than mote con huesillos.”

A recipe for mote con huesillos?  Of course.  My Chilean wife, whose mote and huesillos are pictured above,  does it like this: 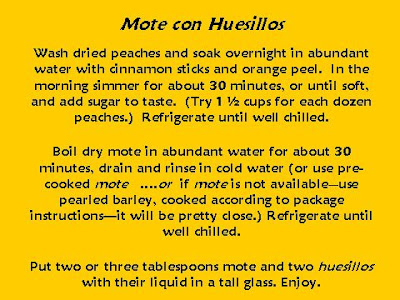