Peruvian restaurants are among the most popular ethnic restaurants in while many ethnic cuisines are toned down for Chilean taste – Santiago Chinese without ginger or garlic, Thai without chilies – Peruvian seems to escape relatively unmodified.
And, as the New York Times has recently discovered, Peruvian cuisine is one of the world’s best, and is now available in many US cities.

… has one of the great cuisines of the world. It is the original fusion food, having absorbed influences from almost every continent over the last 500 years and melded them with ingredients and dishes that provide a direct link to the Incas. While it is best known for ceviche, the marinated raw seafood dish, Peru's food is remarkable for the diversity of its ingredients, from wonderful fresh fish to astounding varieties of potatoes, corn and chilies, and for preparations that encompass the world, from stir-fried beef to pasta with shrimp.  Times, Dining & Wine, August 3, 2009.

Peru [and here I find myself drifting into professor mode] has all the makings of a great cuisine:  diverse environments, from the Atacama Desert to the Amazon rainforest; an indigenous high culture, which meant that there was a cuisine, and not just food; and extensive immigration from Europe, Asia and Africa, which brought new ingredients and cooking techniques which were blended into Peruvian cuisine, and not just added via ethnic restaurants.


The traditional Inca crops included corn, beans, squash, potatoes, peanuts, chilies, sweet potatoes, and avocados; plus lesser known domesticates such as quinoa, a small grain used like rice; oca and ulluco, potato-like tubers; and many herbs and fruits found in Peruvian markets, if nowhere else. 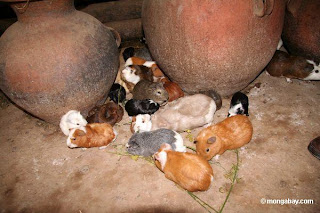 And they had domesticated animals for meat: llamas, alpacas, guinea pigs and ducks.

The arrival of the conquistadores brought little culinary sophistication, but they did bring pigs, cows, sheep, chickens, and wheat, plus the essential onions, garlic and cilantro.  Africans, Italians, Chinese and Japanese brought more, all now incorporated into classic Peruvian dishes.


The characteristic ingredients of the Peruvian cuisine are: 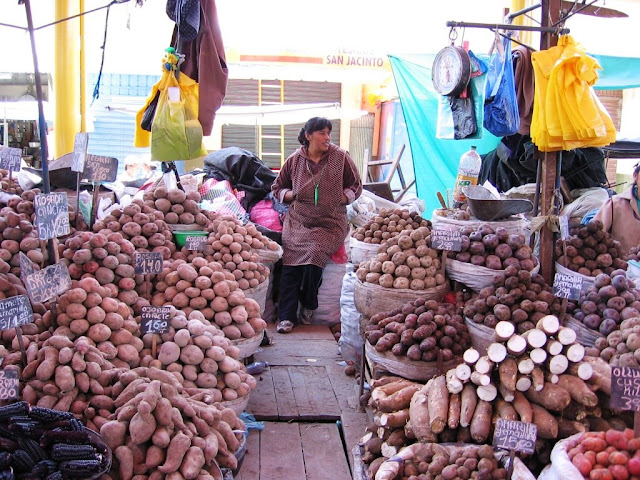 ...potatoes, in many varieties, sizes and shapes; 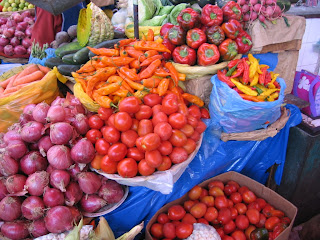 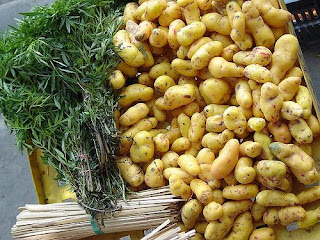 These go into lots of dishes, but the most common restaurant menu items include: 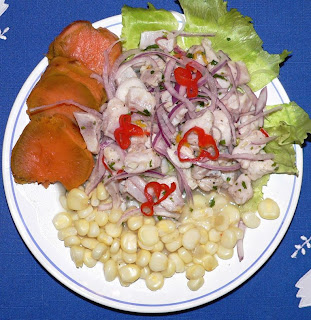 Ceviche - Raw fish, often corvina, lightly marinated in lime juice (which “cooks” the protein) with a touch of garlic, ginger and chile, and tossed with red onion, cilantro and parsley.  Served with slices of sweet potato and Peruvian hominy-mote de maiz. All kinds of combinations are possible, using shrimp, octopus (cooked first), squid, clams, etc. We even had and excellent vegetable ceviche.  Usually a first course; delicious, cool and fresh. 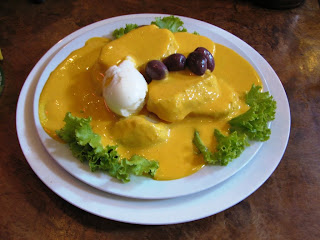 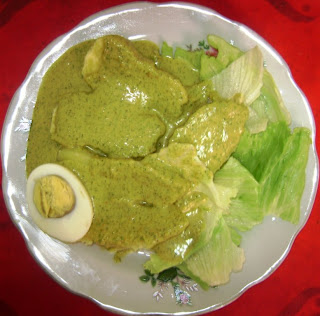 
These are cheesy sauces over boiled potatoes;  similar first courses served cool.  Papas a La Huancaina (potatoes in the stile of the lady from Huancayo) include yellow chiles, evaporated milk, and queso fresco, thickened with cracker crumbs.  Ocopa includes these, plus onion, green pepper, huacatay, and ground peanuts, and is thickened with crumbled vanilla wafers (or animal crackers).  I have only had papas a la Huancaina, which were rich, cheesy and a little bland.  I look forward to ocopa …which I plan to make soon. 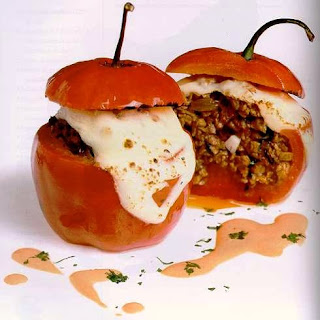 Rocotos are chile peppers, very hot if the seeds are included, but only slightly hot if the seeds and veins are scooped out.  In , where the dish is famous, they are filled with minced beef, seasoned with garlic, oregano, yellow chiles, and minced peanuts; and topped with hard boiled egg slices and cheese.  Rocotos are not common in Santiago's Peruvian restaurants and are rare or unavaialbe outside . 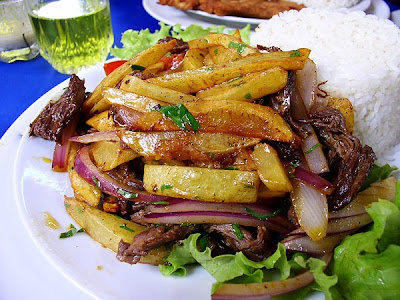 This Chinese influenced stir-fry of beef, onions, tomatoes and French fries is on the menu of every Peruvian restaurant. 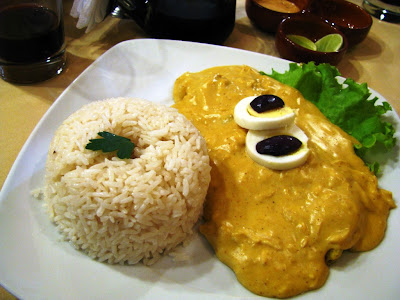 And so is aji de gallina, boneless chicken in a cheese and yellow chili sauce similar to that of papas a la Huancaina (also with HB eggs and olives).  And although aji is Andean Spanish for chili pepper, the dish is usually only mildly spicy. 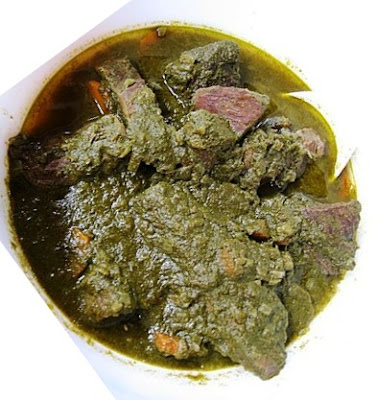 Literally “dry of lamb” this fine dish is not dry and may also be made with beef, goat or alpaca.  (The name contrasts with agguaditos, “little waters,” dishes which are more soup-like.) The meat is cooked in a sauce of beer (originally maize chicha) garlic, onions and lots of cilantro—the dish is bright and tangy.  The one I had in looked like this; not pretty but delicious.

Spaghetti in green sauce, ’s version of pesto, includes walnuts, spinach and evaporated milk, in addition to the traditional basil and garlic.  In restaurants it is often offered with chicken or seafood, like this one that I ate in Mangos restaurant in .
. 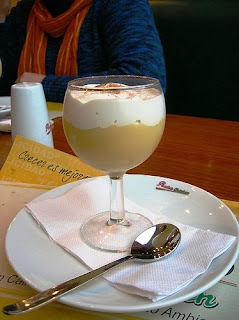 And for desert, Suspiros de Limeñas, “sighs of ladies from ,” a meringue-topped custard served with a port wine sauce.


.
Other dishes you may encounter in your neighborhood Peruvian restaurant are fish, steak or chicken ...la chorrillana, meaning topped with a sauté of tomatoes, onions and peppers; causa, a first course of seasoned mashed potatoes layered with avocado, shrimp, tuna, etc.— very good and often beautifully arranged;  arroz con pato, duck with cilantro seasoned rice; chicharoes de calamares  fried pieces of squid (or fish or pork): and chupes, chowders of seafood and vegetables. Cui, guinea pig, will not be on many Chilean menus.


Recipes for all these things can be found on the web (try YanuQ: Cooking in Peru)  or in The Exotic Kitchens of Peru, by Copeland Marks, a cookbook author who does research like an anthropologist. I’ve used his recipes for some of the descriptions (and some photos are from the web).
Posted by Jim at 8:55 PM