Fly fishing in is trout fishing heaven… one of those when-I-win-the-lottery dreams for US fishermen.  But when you marry a Chilena (something I recommend highly) and move to , it suddenly becomes possible.

About a month ago I got a call asking if I would like to go fly-fishing in , , a long day’s drive over the Andes, 800 km, from .   Although it pressed my retired professor’s budget, I said yes and late in April I found myself on the Rio Aluniné with four Chileans, another Gringo and three Argentinean guides.

The fishing, strictly catch-and-release, is done from Catarafts, holding two fishermen and a guide. The fishermen cast to the banks, usually 40 to 60 feet away, with fly lines that have fast-sinking tip sections.[i] On the end is a clear leader attached to a streamer fly with a barbless hook. 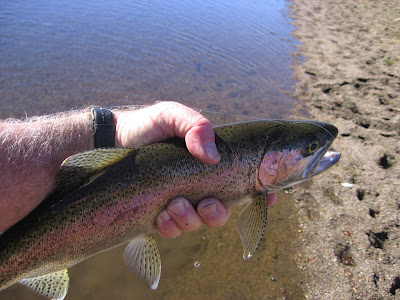 The fishing was great and the fish were strong and beautiful—all returned gently to the river to live out their lives, and perhaps thrill another fisherman. 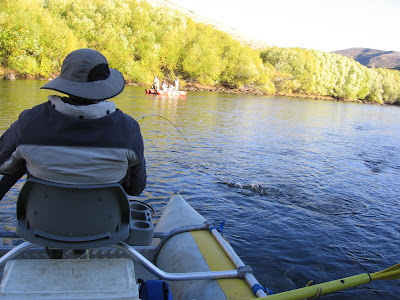 As great as the fishing was, there was more to the experience:  food!   Each day at around 2:00 we stopped for almuerzo, “lunch,” but more like Sunday dinner.  The first guide to arrive built a drift wood fire, and as the others arrived, they set up a table, broke out the tablecloth, plates, silverware, wine glasses, the wine and good whiskey. 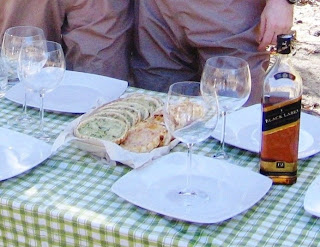 Starters, sometimes prepared by our guides’ wives and sometimes by professional chefs, were diverse and delicious. Depending on the day there were: cheese and herb tarts (right); empanadas; eggplant, onions and peppers cooked like ratatouille; strips of kidneys in wine; mushrooms in cream; or stacks of filled crêpes like those below. 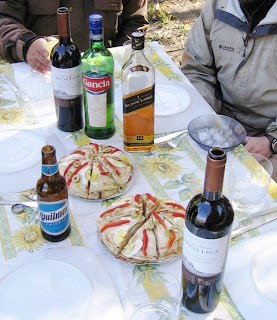 To ease the muscles after a morning of steady casting there was a little whiskey (the bottle lasted a week), a  beer or a Gancia aperitif:  Gancia (Argentine-Italian vermouth), lemon juice and sparkling water… or in our case, Sprite. 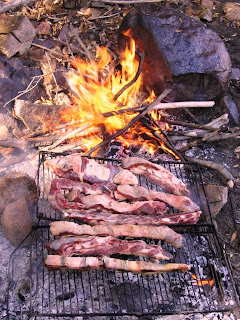 By then the first coals were ready to scrape from the fire to under the grill, and the meat was put on:  in this case asado de tira, short ribs.  Other days were filete, strip loin, or roast pork. 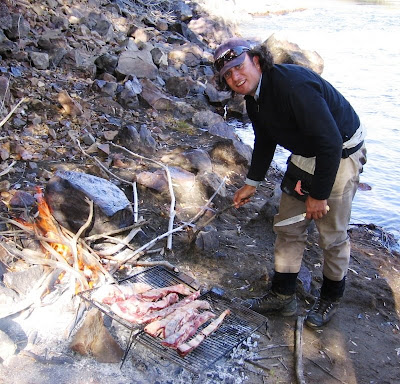 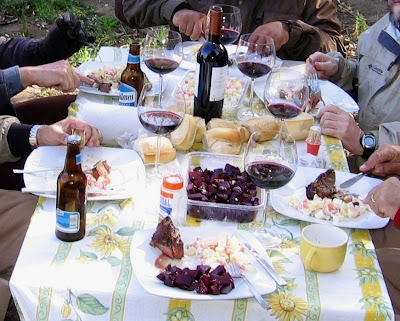 The wine was Chilean, a tradition with this group.  In this case a fine Castillo de Molina, Cabernet Sauvignon reserva went with the asado, beet salad and ensalada rusa of potatoes and carrots. 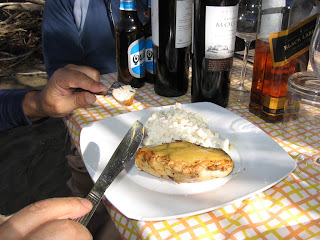 On other days there were chicken breasts stuffed with peppers and onions and served with a mustard sauce and Waldorf salad Argentine. 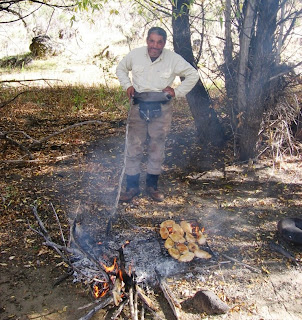 And on the final day, something “light” (raviolis in cream sauce) since we would all be celebrating with a chivo asado (BBQ goat) that evening. 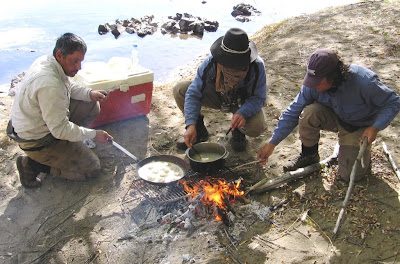 And there were desserts… flan, cakes, puddings, but I was too full to take pictures.
Since this is a food blog and not a fishing blog, I have spared you lots of fishing pictures, but here’s one of Nico fishing one day after lunch to whet the appetites of any fly-fishers who may be reading. 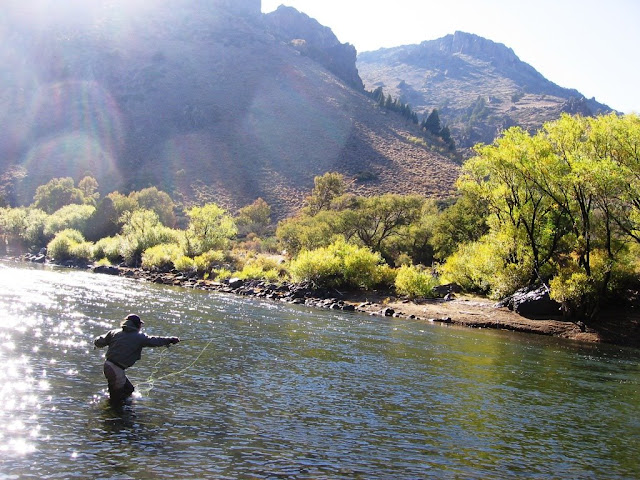